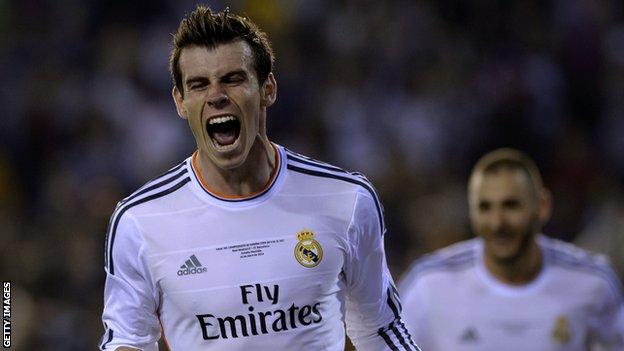 The 24-year-old has been training on his own after a bout of flu and missed the 4-0 win over Osasuna on Saturday.

But Ancelotti insists Bale will be ready to feature when Real take a 1-0 advantage into the semi-final second leg at the Allianz Arena on Tuesday.

"We preferred that Bale trains on his own but now he's better," he said.

Gareth Bale has scored five times in the Champions League for Real Madrid this season, with his last three coming against German opposition

Bale became ill last week but came on as a 73rd minute substitute as Karim Benzema's goal earned Real a narrow 1-0 lead over holders Bayern in the Bernabeu Stadium.

But the Wales international was not involved in the squad of 18 against Osasuna when two Cristiano Ronaldo goals helped Real to a fourth straight league win.

Bale's last start was against Barcelona in the Copa del Rey final on 16 April, when the former Tottenham and Southampton player's winner kept alive Real's hopes of securing a domestic and European treble.

Real have been crowned champions of Europe a record nine times but have not reached the final since 2002.