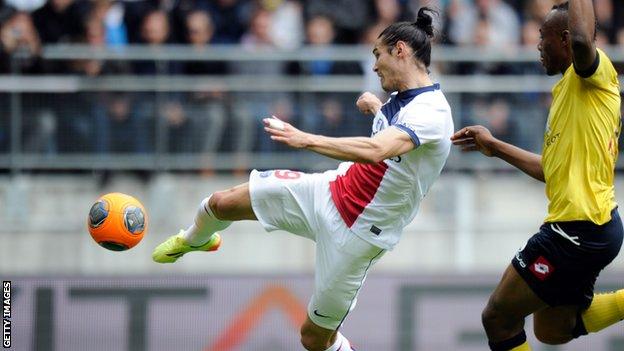 Paris St-Germain missed the opportunity to secure their second successive French title after only managing a draw at relegation-threatened Sochaux.

PSG knew a win would make it impossible for second-placed Monaco to catch them with three games left.

Thiago Silva is the third player to score more than one own goal in Ligue 1 this season after Reims pair Anthony Weber and Aissa Mandi.

But skipper Thiago Silva's own goal after the break put their title celebrations on hold.

PSG, who are eight points clear of Monaco, will wrap up the league on 7 May if Claudio Ranieri's side fail to beat Guingamp.

"The trouble is that people think it's a done deal,'' PSG coach Blanc said after Sunday's draw. "The more people say it, the more we also believe it.

"I know we haven't won the league yet. There's not much missing but we still miss that little something."

But even if Monaco beat Guingamp next week, PSG will still secure the trophy if they beat Rennes later on the same day.

The Parisians' triumph last season, with the help of ex-England captain David Beckham, was their first Ligue 1 title since 1994.