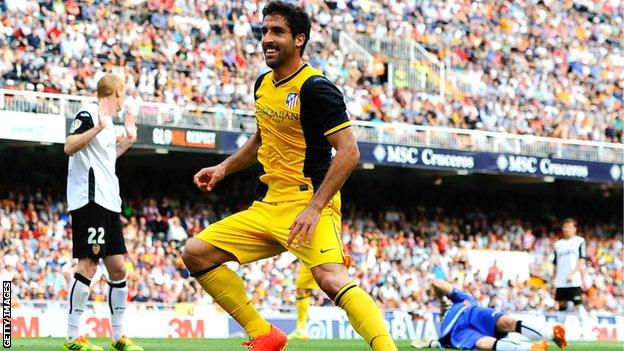 Atletico Madrid moved to within two wins of the La Liga title after Raul Garcia's goal earned Diego Simeone's side victory at Valencia.

The 27-year-old midfielder glanced Gabi's angled pass into the net following a mix-up between keeper Vicente Guaita and Jeremy Mathieu.

Atletico finished with 10 men after Juanfran was shown a straight red for bringing down midfielder Pablo Piatti.

Atletico's ninth straight league win restored their six-point advantage at the top over title rivals Real Madrid, who beat Osasuna 4-0 at the Bernabeu on Saturday.

Los Rojiblancos now have 88 points and, with just three games remaining, they can wrap up their first title since 1996 before the final match at Barcelona on 18 May - if they win their next two games over mid-table opposition.

Simeone's side, who face Chelsea in the Champions League semi-final second leg at Stamford Bridge on Wednesday, travel to Levante on 4 May before hosting Malaga on 11 May.

Although Real can still reach 94 points if they win their last four league games, Atletico will secure the title with two wins on the head-to-head rule after taking four points off their neighbours this season.

This was their 20th victory achieved with a clean sheet this season and Simeone's side have now recorded eight clean sheets in the last nine games.

Although Brazilian forward Jonas spurned a great chance for Valencia, Atletico should have won by a more handsome margin with Costa failing to add to his haul of 27 La Liga goals for the season.

The only negative was the dismissal of former Real Madrid defender Juanfran for his cynical challenge on Piatti deep into stoppage time.