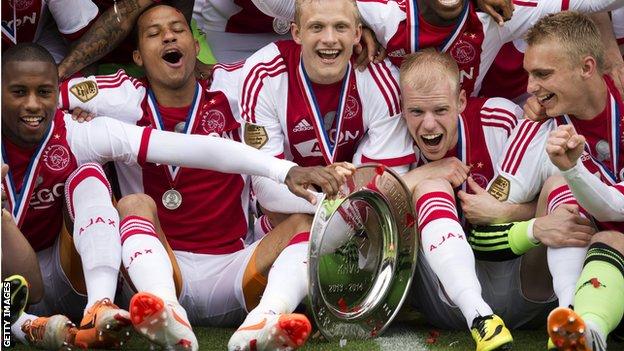 Ajax celebrated a fourth successive Dutch league title under Frank De Boer's management despite being held to a 1-1 draw at struggling Heracles.

The draw left the Amsterdam club four points clear of nearest rivals Feyenoord with one round of Eredivisie fixtures remaining.

He is the first manager in the Eredivisie to win four straight titles.

"I am proud," added De Boer. "It was not the prettiest game, but eventually we dragged in the title."

It is the 33rd time Ajax have won the Dutch title.

A league double over Feyenoord played a big part in Ajax's latest league triumph, while they also took four points against third-placed FC Twente and responded to September's 4-0 loss to PSV Eindhoven by winning the return fixture.

"If we see that after the winter break we beat Feyenoord, Twente and PSV and drew with Vitesse, then we are worthy champions," added De Boer.

"Over the whole season we've been the best."