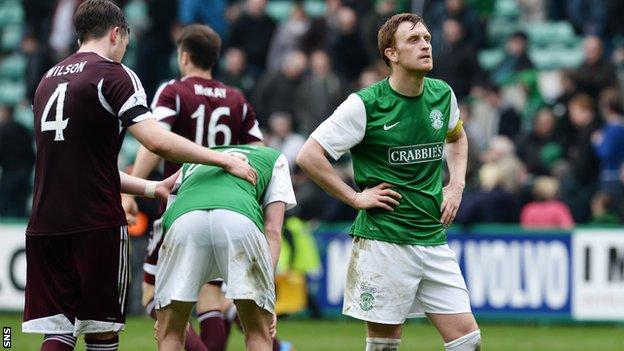 Hibernian manager Terry Butcher remains adamant his side will secure Scottish Premiership safety, despite their 2-1 derby defeat by Hearts.

They remain just a point above the relegation play-off spot with three games to play.

"But we must play at the level of performance we played at today, if not higher.

"The result doesn't reflect the actual nature of the game for me, they've scored two goals against the run of play.

"I think we deserved something from the game but that's how things are going for us.

"We certainly put in a very good performance here that was full of commitment. But it's disappointing when you do everything and lose two goals from set pieces.

"We've got three games to come and we can't do anything about this one now.

"What's it going to take [to secure safety]? It's going to take the confidence, the belief and bottle that we showed in this match, and take that forward into the next three games and we'll be alright."

The frustration among the Hibs fans was apparent when the Easter Road side fell two goals behind.

But Butcher was happy with how his team responded after the break.

"Half-time was a difficult team talk because you're 2-0 down and the crowd are disappointed and angry," added Butcher.

"We're disappointed and angry as well but we've got to come out with a bit of control in the second half, which we did.

"We reacted well in the second half but just couldn't find that second goal. James Collins had a chance and you would have liked it to go in, because I'd have felt then we could probably go on and get a winner.

"We'll be hurting because of the reaction from lots and lots of people, but it's their call, they can react whatever way they like. We've got a job to do and we want to finish that job off.

"It helps [that two of three games are at home] because when we score a goal the fans get behind us, they're desperate for us score and are desperate to see us win."