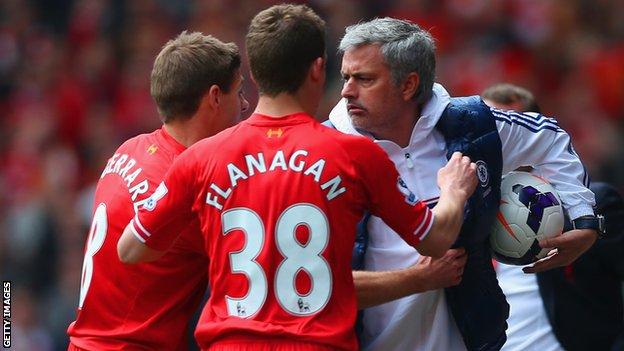 The outcome of the Premier League title race remains out of Jose Mourinho's hands, but it is no surprise the Chelsea manager has delivered its latest twist.

Mourinho masterminded Chelsea's 2-0 victory over leaders Liverpool on Sunday, and has now overseen home and away wins over the Reds and their title rivals Manchester City this season.

His approach may not be pretty - a point repeatedly made by Liverpool boss Brendan Rodgers after his side's defeat - but it undoubtedly works.

The Chelsea manager and his team frustrated and annoyed the home support and players in equal measure, and finished up with all three points.

It meant a day that began with an almost euphoric atmosphere at Anfield, where thousands lined the streets outside to welcome the Liverpool team bus by singing 'we're going to win the league', ended with the familiar sight of Mourinho celebrating on the touchline.

What was threatening to turn into Liverpool's relentless march towards a first title in 24 years is now back to being a three-horse race.

This is how Mourinho pulled off his latest triumph.

Already hit by injuries and suspension to key personnel, Mourinho had threatened to field a weakened team ahead of Wednesday's Champions League semi-final second leg against Atletico Madrid, with the tie intriguingly poised after a 0-0 draw in Spain.

People pondered the Premier League rules, and wondered whether Liverpool had got lucky.

In the end, Mourinho started with Gary Cahill and Willian on the bench, but the closest he got to a left-field selection was the inclusion of 20-year-old Czech centre-half Tomas Kalas.

Kalas was making his first senior start after - if you include stoppage time in two brief substitute appearances against Arsenal and Galatasaray - a total of 10 minutes in a Chelsea shirt.

It didn't show. He made a perfectly-timed tackle on Raheem Sterling in the opening minutes to settle any nerves, and could even have got on the scoresheet - had he connected properly with a first-half corner.

Because of the result, nobody made too much fuss about Kalas after the game. But he played well alongside Branislav Ivanovic to help keep Luis Suarez quiet, and his manager definitely noticed, using him as a way of praising his entire side.

"Normally we would have to speak about the kid playing his first match in the Premier League, in a special stadium against a big opponent," said Mourinho.

"But I think every player performed in a fantastic way, individually and as a team it was a fantastic performance."

"A defensive display?" Mourinho asked with mock ignorance when he was accused of being negative after the game.

"Teamwork" was the word Mourinho preferred when asked how he had brought Liverpool's 11-game winning streak to a grinding halt, kept out the top-flight's top scorers, and inflicted their first defeat in 17 league matches in 2014.

Rodgers was less complimentary when posed the same question. "They sat in really deep," the Liverpool boss said. "They parked two buses, rather than one".

He had a point. The Blues backline was often on the edge of their own area, and it was sometimes difficult to see where their defence stopped and their midfield began.

Chelsea were also nowhere near as devastating on the counter-attack as they were in their win over Manchester City at Etihad Stadium in February - but it would be wrong to suggest they did not pose a threat.

Even before Steven Gerrard's untimely slip gifted Chelsea the lead, Ashley Cole had forced Reds keeper Simon Mignolet into a full-length stop and Kalas missed with his header.

Liverpool continued to dominate possession into the second half, but they also continued to run into dead ends, and their lack of ideas was summed up by Gerrard's increasingly desperate efforts to make amends for his error from distance.

All the while, the Blues looked ever more dangerous on the break - culminating in Willian's injury-time goal that sealed victory.

They were set up to exasperate Liverpool, and Chelsea set out to agitate them too.

There was no chance of the Reds making their trademark fast start to the game with the amount of disruptions to their rhythm.

We saw the first of those in the first minute. Sterling fouled Cole as he tried to burst into the box - and Blues keeper Mark Schwarzer took more than 60 seconds to take the free-kick.

"It was disappointing," Rodgers said afterwards. "I think they got booked for time-wasting in the 92nd minute [when Cole was shown a yellow card] but I think everyone could see from the first whistle that it was clearly their plan to frustrate."

It was a plan that worked, although Mourinho was not going to admit it.

"Time-wasting, what's that?" he said, again wearing a poker face. "We have never spoken about this before and only today you are aware of it?"

Rodgers's team were on the attack for most of the game and their manager continued that approach in the aftermath. I counted a dozen digs towards Mourinho in his post-match news conference.

He started by congratulating Chelsea for their win, but swiftly added "they probably came for a draw" and explained how easy it was to set up that way.

Then he repeatedly stated he would never play in such a defensive way as Chelsea - describing it as the "polar opposite to our outlook" - and how Liverpool were still above them despite spending far less money.

He finished by claiming the game would be the perfect preparation for playing Crystal Palace next week.

"And Palace will have lots of players behind the ball, which we will be prepared for as well."

If it was not for Rodgers's enthusiastic delivery, you could interpret those comments as evidence he is feeling the pressure at the end of a season that has already seen his side exceed all expectations.

Mourinho had already been and gone by the time Rodgers faced the media, but you sense he would have enjoyed being told about those comments by his opposite number.

His own news conference mirrored his team's performance - spiky, defensive and defiant - but he made his exit wearing a smile.

It seems ridiculous when you consider they are in charge of the teams in first and second place with only two games of the season to go, but neither manager would entertain talk they could be champions on 11 May.

Rodgers did not mention it once in his programme notes before the game - when Liverpool's title hopes were still in their own hands - preferring to concentrate on the fact his side are guaranteed a third-place finish and Champions League football after last week's win over Norwich.

Afterwards - with success no longer in his control - he talked about how big an achievement it would be to finish above Chelsea if they won their last two games, and the possibility of that perhaps being enough to see off City too.

He was bullish about continuing their positive outlook despite the end of their winning run but, when it came to the question of whether they could win the title, would only add "there is still a way to go".

Mourinho went for flat-out denial. "We have no chance," he said. "We are not in it. The champions will be Liverpool or City, we have nothing to celebrate."

Despite this latest victory, Chelsea need further slip-ups from both of their rivals and must remain third-favourites.

But, with Mourinho in charge, nobody will believe they are out of it until the maths says otherwise.