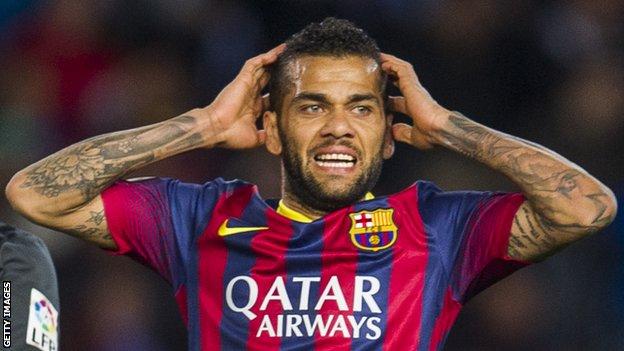 Barcelona's Dani Alves reacted to having a banana thrown at him during Sunday's dramatic 3-2 win at Villarreal by peeling it and then taking a bite.

He was about to take a corner when the banana landed on the pitch.

"We have suffered this in Spain for some time. You have to take it with a dose of humour," Alves said.

"Barcelona wishes to express its complete support and solidarity with Dani Alves following the insults he was subject to," a club statement read.

"Barcelona urges all clubs to continue fighting against the blight on the game which any kind of aggression against a sportsperson on the basis of their race represents.''

Former Barca striker Gary Lineker praised the actions of Alves. "Picked it up, peeled it, ate it and proceeded to take the corner," he tweeted. "Top response."

Neymar, a club-mate of Alves and a fellow Brazil international, and Manchester City and Argentina forward Sergio Aguero also displayed their solidarity with the player by publishing photographs of themselves eating bananas.

Compatriots Hulk, Fred and Lucas Leiva also lent support via their social media accounts, with Liverpool midfielder Lucas writing on Twitter: "Congratulations on your attitude yesterday. We are together on this fight against racism."

Tottenham and Togo striker Emmanuel Adebayor said on Twitter: "Massive respect to danid2ois, there is no place for Racism in Football. #saynotoracism."

Spurs duo Nacer Chadli and Moussa Dembele were also pictured eating bananas with a message supporting the fight against racism.

The Spanish media reported that match referee David Fernandez Borbalan made a note of the incident and that the country's football association, RFEF, will meet on Tuesday to discuss the matter.

Alves has been a regular target of racist abuse during his 12 years in Spain with both Sevilla and Barcelona.

View from the Spanish press

"The player of Barca reacted in an exemplary manner: took the banana quickly ate a piece and threw the rest away from the field, a move that has been applauded for its irony to racism."

"The Brazilian took the racist gesture on the chin, nonchalantly picking up the fruit, peeling it and taking a bite. Alves had the last laugh as Barca roared back from 2-0 down to win."

"We aren't going to change things easily," he added.

Referring specifically to Sunday's incident, which took place on 75 minutes, he said: "If you don't give it importance, they don't achieve their objective."

Alves, 30, was involved in Barca's first two goals as they came from 2-0 down against Villarreal to win 3-2 at El Madrigal.

Lionel Messi then sealed the comeback seven minutes from time to reach the 40-goal mark in all competitions for the fifth straight season.

The win leaves Gerardo Martino's Barcelona side second in the table, four points behind leaders Atletico Madrid and two ahead of Real Madrid.

Barca and Atletico have three matches left, but Real, who play Bayern Munich in the Champions League semi-finals on Tuesday, have a game in hand. Atletico face Chelsea in the second semi-final on Wednesday.