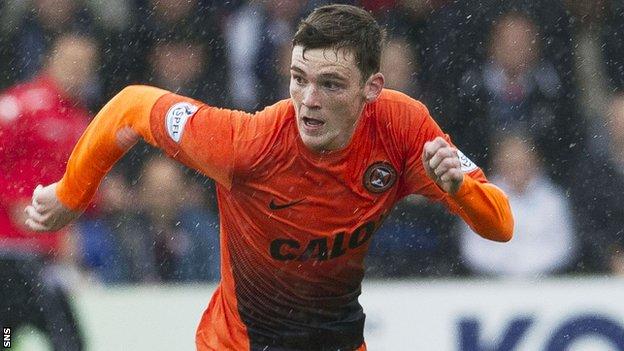 The 20-year-old has been a mainstay in the United side this season, having joined from Queen's Park last summer.

With United having reached the Scottish Cup final, where they will face Saints, Robertson is eager to end a memorable season with a medal.

"It has been a really successful season for me but this award probably means the most to me, because the players have voted for me," he explained.

"Stuart and Gauldy have had amazing seasons but I am glad to win it. We have been joking since we were nominated and there was a few laughs.

"I wouldn't say we were really surprised when the three of us were nominated because we were playing well as a whole team but there has to be credit given to the other players like Paul Paton and John Rankin, who have played every week and made us tick.

"If we could win the Scottish Cup that would top off the most amazing season for me. We know it will be tough against St Johnstone but we will try to get the win on that day.

"We let ourselves down in the league last week by getting beat in the league by St Johnstone but we were magnificent against Motherwell in the 5-1 win on Saturday.

"The Scottish Cup final will be completely different with the fans, the atmosphere and what is at stake."