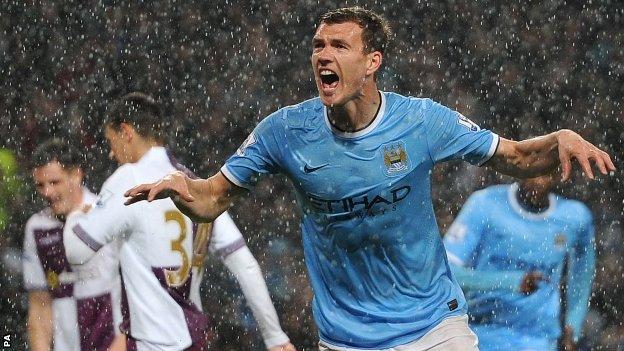 The 2013-14 Premier League title race will go down to the final day of the season on Sunday with Manchester City in pole position to take the crown.

City are odds-on favourites to win their second title in three years after Wednesday's 4-0 win over Aston Villa moved them two points clear of Liverpool with one match remaining.

The victory means Chelsea are now unable win the Premier League and leaves Manuel Pellegrini's men effectively only needing a point at home to West Ham to seal the title on Sunday because of their goal difference, which is 13 superior to Liverpool's.

Should City lose, however, a victory over Newcastle at Anfield would hand Liverpool their first league title since 1990.

The Reds had been favourites until a 2-0 defeat by Chelsea on 27 April and saw their hopes all but extinguished when Crystal Palace staged a remarkable comeback to draw 3-3 at Selhurst Park on Monday.

Meanwhile, Manchester City, Liverpool, Chelsea and Arsenal are guaranteed to finish in the top four and will be England's four representatives in the Champions League next season.

Everton have already qualified for next season's Europa League along with FA Cup finalists Hull City.

They will be joined by Tottenham or Manchester United with the former only needing a point against Aston Villa to make certain of sixth spot. United will need to win at Southampton and rely on Spurs to lose in order to pip the Londoners to the final Europa League spot on goal difference.

At the bottom, Norwich City will be relegated unless they beat Arsenal and fourth-bottom West Brom lose to Stoke. The Canaries would also need a massive 17-goal swing in their favour to edge out the Baggies on goal difference.

City's final game is at home against West Ham on Sunday, the final day of the season, while Liverpool host Newcastle.

What the managers say

Manchester City manager Manuel Pellegrini: "Winning the title is very important but so is the way we are going to win it.

"There are many ways to win it but I choose this one - attractive football.

Liverpool manager Brendan Rodgers: "You never know what can happen. I promise for the time I am here we will fight for our lives and we won't finish until Newcastle.

"If we win on Sunday and don't win the league but finish second that means we've finished second to the richest and most expensive team in world sport.

"We will have taken them right to the wire. That will be a sign of the remarkable progress we have made this season."

What the media say

The Daily Mirror's Oliver Holt: "On Wednesday night, the relieved cheers of the City fans brought memories of the club's halcyon days rolling back. They are in another golden era now. This nervy, scratchy victory over Aston Villa took them to the brink of a second league title in three years. They only need a draw back here against West Ham on Sunday to make it theirs but on the night, they did not make it easy."

The Independent: "It was a Manchester spring evening that might have been dragged straight from the pages of Morrissey's recent memoirs: stupendous rain, acute longing and a dreadful sense of foreboding. But this time in the humdrum town, Manchester City did not let anyone down."

Daily Mail: "This was the scenario Brendan Rodgers must have feared as the Liverpool team bus drove away from Selhurst Park on Monday night. Watching Manchester City beat Everton 3-2 at Goodison Park last Saturday, Rodgers detected nerves - some fatigue - in the ranks of his Barclays Premier League rivals. There was, the Liverpool manager thought, something left to play for this season. In south London, though, all that changed. It changed the league table but, more importantly, it changed the context, the whole feel, of this occasion on Wednesday night."