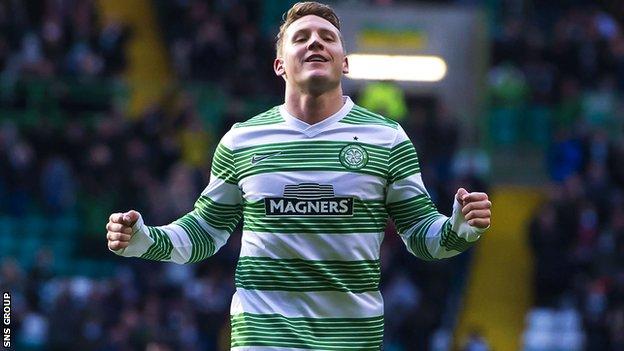 Celtic's Kris Commons thinks retiring from international football was a key factor in the form that won him PFA Scotland player of the year.

Playing for Scotland was an "unbelievable experience" for the forward, but the 30-year-old is not planning on adding to his 12 caps.

"I'd rather play another four or five years at the top level of club football than try to balance both," he said.

"It's hard to blend internationals and stay as fit as you can."

Commons, who scored two goals for Scotland, announced his decision to step away from Gordon Strachan's squad at the end of last season.

And he has followed that with the highest goals tally of his career, with 27 strikes, as Celtic cantered to a third successive title.

"There's nothing better for me than playing football and spending time with my family," he added.

"And I've had the luxury of getting the best of both.

"I've been able to get away during international breaks and that family time is one of the most important things for me.

"When things are going well off the park, you tend to perform more freely on it.

"As it stands, I think I've played my best football for Celtic because of the mini breaks that you get throughout the season.

"It was an unbelievable experience being part of it, but I didn't think I was fit and healthy coming back to Celtic from the international set-up and giving my best for the club."

Commons, who has scored 23 league goals this term, was nominated for the player of the year award along with team-mates Fraser Forster, Virgil van Dijk and Kilmarnock's Kris Boyd

"It's a bit overwhelming really," he said of receiving the most votes from his fellow players.

"It was just great to be nominated and I was truly gobsmacked when I got the shout. I thought Virgil or Fraser would win.

"Our league form has been outstanding, with just the one defeat. Big Fraser and the back four have been excellent all season."

Commons spent the first half of the season playing behind a central striker but has moved deeper recently to allow manager Neil Lennon to partner strikers Anthony Stokes and Leigh Griffiths.

"If you are scoring on a regular basis you will always be in the limelight and I've been given the opportunity to play a little more advanced and get a lot more goals this season," he explained.

"I feel like I'm going to score in every game, which is weird because I'm used to setting up the goals. I've been the in-between man for the midfield and strikers.

"But this season I've been going into games thinking I'll get at least two or three chances.

"I've never scored this many in a season. It's been abnormal for me but certainly something I will try to replicate next season."