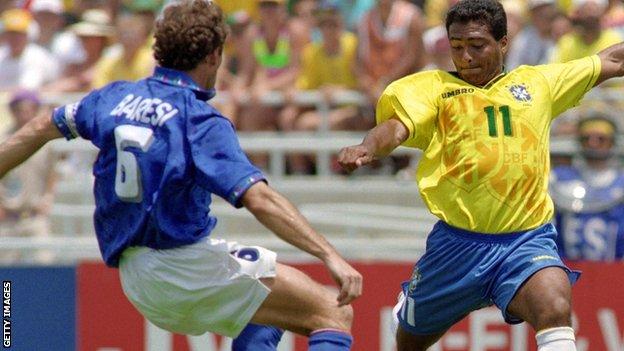 No European team has won a World Cup held in South America - it is one of those facts that on examination is not quite as significant as it might appear. They have only had four opportunities, the last of which was way back in 1978.

Perhaps, then, this fact has little relevance for 2014. The world is vastly changed since 1978. In psychological terms, it feels much smaller. Crossing the Atlantic Ocean is not such a marathon trek. So maybe this will be the year that Europe breaks its South American duck.

However, in terms of climate, this will be the most difficult South American World Cup yet for the European visitors. June and July are winter months. Uruguay (1930), Chile (62) and Argentina (78) can be decidedly cold at this time of year.

The previous Brazilian World Cup (1950) was mainly played in the south eastern cities of Rio de Janeiro and Sao Paulo, where winter temperatures are mild. But the tournament timidly pointed the way to a more decentralised future for Brazilian football, taking one match up to Recife in the north east.

Sixty four years later, the north east will stage a third of the World Cup, with games in Salvador, Fortaleza and Natal as well as Recife. This region is untouched by winter - it boasts tropical heat all year round - as do Manaus to the north and Cuiaba to the west, two other host cities.

In temperature terms, matches in all of these cities will resemble those of North American World Cups (Mexico in 1970 and 86, USA in 94), where many of the matches were played in sauna-like conditions - and, also, where the Europeans have never come out on top.

Added to this is the fact that world governing body Fifa is staggering the matches with three different kick-off times per day, all of them accessible to the European TV audience. At this time of the year Brazil is four hours behind the UK. The only way to fit in three separate matches and reach a big European audience is to start early. So 24 matches will kick off at 13:00 local time - 17:00 in the UK.

In the venues of the south and the south east, this is not a problem. But up in the north east - where seven of these early kick offs take place - teams are likely to be exposed to fierce heat. Even the next kick off time (16:00 local, 20:00 UK) can be uncomfortable; Spain and Italy really suffered through their semi final played at this time in Fortaleza in last year's Confederations Cup.

But as for the 13:00 starts, it is unthinkable for a major domestic game to be played in these venues at that hour. When I speak to local players and coaches about the lunchtime kick-offs in the north east, I consistently hear the same word: "Inhumane"

Argentina were the big winners of the draw, and not because they line up in their group matches against Bosnia, Iran and Nigeria - but because they will play the entire tournament without once having to confront the heat of the north east.

At the other end of the scale are Germany. Not only are Portugal, Ghana and USA tricky group opponents but the Germans have 13:00 kick-offs in Salvador and Recife either side of a 16:00 start in Fortaleza.

Even if, as predicted, they make it through safely to the knock-out round, they will surely have paid a price for such prolonged exposure to the conditions. Their athletic capacity will have been drained.

Italy also have it hard - though they have made it much harder for themselves with the bizarre option to base themselves outside Rio, a long journey away from all of their matches. After playing England in Manaus the Italians then have 13:00 kick-offs in Recife and Natal.

And to gauge the effects of playing in high temperatures, the Italians have the experience of USA 94, when they lost in the final on penalties to Brazil. Their captain and outstanding centre back Franco Baresi injured a knee early in the competition and underwent an operation.

Amazingly, he was thrown back into action in the final - and even more amazingly, he gave a man-of-the-match performance, blotting out the great Romario. The conclusion drawn by both coaches - Italy's Arrigo Sacchi and Brazil's Carlos Alberto Parreira - was that in such conditions it was better to be injured than tired.

Sacchi tells of how, at half time his midfielder Roberto Donadoni announced that if the team pushed up into the opposing half they simply would not be able to get back again. And this, surely, is the most salient point about football in extreme temperatures; it leads to cautious play.

How will the Germans, with their swashbuckling approach, adapt to this reality? In the last two World Cups they have ended Argentina's dream. But if it happens again this time, Lionel Messi and company should be by far the fresher side.

Questions on South American football to vickerycolumn@hotmail.com, and I'll pick out a couple for next week. From last week's postbag;

Q) I'm just wondering what chance Atletico Madrid centre back Miranda has of forcing his way into the Brazil team? With David Luiz not playing regularly at centre back could he overtake him? Also do you see any late bolters for the squad?

Brazil coach Luiz Felipe Scolari is a master group former. He chooses his players and fills them with confidence. Three of the centre backs are a lock in; the first choice pairing of captain Thiago Silva and David Luiz (and the fact that Chelsea use him elsewhere is, as far as Brazil are concerned, Mourinho's problem) plus Dante of Bayern Munich. There are a number of candidates for the remaining slot - the front runner is probably Marquinhos of PSG, who is being groomed for the future. Others who will be waiting and hoping include Dede of Cruzeiro and Henrique of Napoli.

A clear case can be made for Miranda, but he's been out of contention for a while, and those who have played have done well, so I think it's unlikely - and the same applies to any late bolters, including Philippe Coutinho of Liverpool. Barring late injuries, Scolari's problem is not thinking about surprise selections - it is that some of those who have served him well over the past year will have to be left out.

Q) Are there two different versions of Alexis Sanchez? I just feel Alexis plays a little conservatively and restricted within his role in the Barcelona system when playing for his club side compared to him really playing for Chile when he has more of a free role, and takes on defenders more often.

I think you have a point - in fact last week's column dealt with this very issue, of how a different collective context produces a different player. Sanchez himself said that when we went to Barcelona it was as if he had to learn to play football all over again - he had always been the most skilful player and thus allowed to follow his instincts, and now he had to fit into a passing gameplan.

Also there is the psychological boost (or burden) of being important. With his club, he's just one more player. For Chile, he's the leader of the attack, and seems to respond well to this.