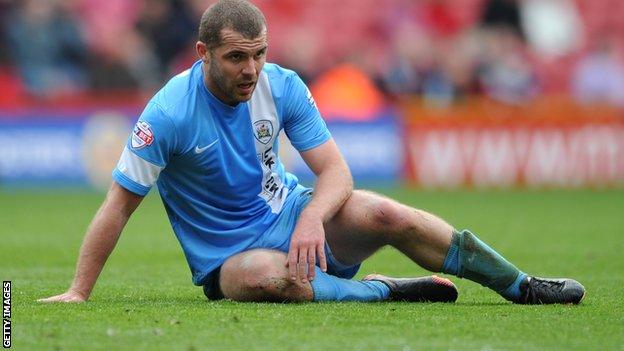 Barnsley chief executive Ben Mansford expects the club to have a 'very competitive' budget in League One next season.

The Tykes were relegated from the Championship on Saturday after a 3-1 defeat at Middlesbrough.

"I think we will be an attractive proposition to players who are out of contract or are looking for a new challenge," he told BBC Radio Sheffield.

"I think we will recruit very well."

He continued: "We want to put together a strong squad to give the supporters a winning feeling that has probably been missing over the last three or four years."

No repeat of the great escape

The Tykes went into the final day of last season in the Championship relegation zone but ensured their survival thanks to a draw at Huddersfield and Crystal Palace beating Peterborough to send the Posh down.

Barnsley, who appointed Danny Wilson to replace the sacked David Flitcroft in December, have struggled all season and will be returning to the third tier after eight years in the Championship.

However, Mansford is optimistic that the club will respond positively to the disappointment.

"Our aim is to come back stronger," he said. "We are duty bound to do everything that we can to make sure that we do that.

"When the club has come back from relegations before there has been a local core to the team and we need to get people to come here who want to engage with the community.

"I think we really need to limit the number of loan players we have."

Mansford confirmed that defender Peter Ramage is the only loan player who will be involved in the club's final game of the season against QPR at Oakwell on Saturday.

The club expects to receive offers for some of their contracted players, including goalkeeper Luke Steele, defender Martin Cranie and striker Chris O'Grady.

"Some of them may well attract interest from Championship suitors and in that case we will have an opportunity to make the right decision for Barnsley," he added.

"Until such a time that any of our players tell us they want to leave or we get a bid then we will stand by our contractual obligations."