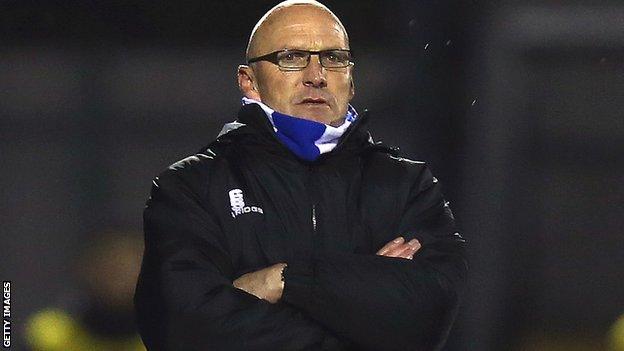 Steve Burr will hold talks about his position as Chester manager in the next few days after the club were relegated from the Conference Premier.

The Blues went down on Saturday after they drew 2-2 with Salisbury and Hereford won 2-1 at Aldershot.

Burr, who replaced Neil Young as boss in January, told BBC Radio Merseyside: "I'll have to sit down with the people here and see what they want to do.

"It [relegation] will go down on my CV and they might not want me here."

The former Kidderminster manager continued: "I do feel that, since I have arrived, we have had a go at keeping the team up. Certain decisions that you have to make and have made, I feel we've got most of them right.

"We'll have to sit down when we've got clear heads and see where we're going."

Chester won the Conference North title in 2012-13 and took five points from their final three games to finish the campaign with 51 points, but it was not enough to prolong their one-season stay in the Premier division.

"The table doesn't lie at the end of the season. Normally you'd expect 50 points to be enough [to stay up] but it wasn't the case," said Burr.

Chester, who were formed following the demise of Chester City and had won three successive promotions to reach the fifth tier of English football, were one of the few clubs in the Premier to operate with a part-time playing squad.

And 54-year-old Burr believes turning full-time could be sustainable in the future, adding: "This club have come a long way in a short time and the league that they have come in to has probably hit them a bit harder than they would have thought.

"A club like this, for me, should have a full-time playing squad. When you look around at teams in the division, they have got full-time squads and don't get the crowds we get here.

"The potential's enormous and that's what has made it more of a blow."