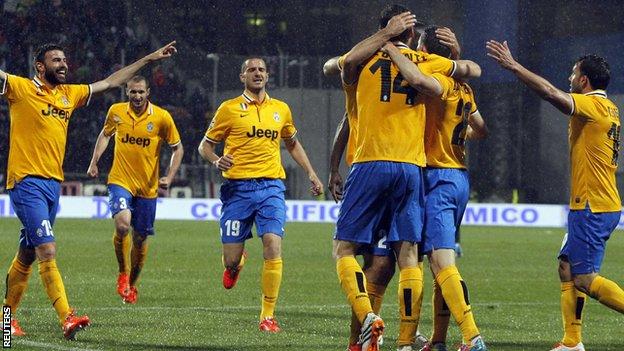 Juventus are on the cusp of clinching a third successive Serie A title after they came from behind to beat Sassuolo.

Simone Zaza beat Gianluigi Buffon at the near post to give the hosts the lead but Carlos Tevez's deflected finish levelled matters.

Claudio Marchisio made it 2-1 with a fierce drive before Fernando Llorente's backheel sealed the win.

Currently on 93 points, Juventus are on course to become the first Serie A club to reach the 100-point mark

The two sides face each other in the penultimate game of the season but Juventus need just two more points and could secure the title when they host Atalanta at home on Monday. They could already be champions by then if Roma do not beat Catania the previous day.

Juventus coach Antonio Conte was looking for a positive response from his players in this game after their 2-1 defeat by Benfica in their Europa League semi-final first leg fixture last week.

However, they fell behind when Nicola Sansone raced away before feeding a pass to Zaza, whose deflected shot got the better of Buffon.

Juventus levelled 10 minutes before the break when Tevez received a pass from Marchisio outside the area and his powerfully struck shot struck Alessandro Longhi to deflect into the net.

From then on, the visitors were in control and Andrea Pirlo's chipped pass over the defence allowed Marchisio to put Juventus ahead.

Llorente's clever finish from close range late on ensured they took the three points before the full-time whistle was greeted by wild celebrations from the Juventus players and Conte.

"We have taken a very important step toward a historic third title.

"We are having a super season. I hear talk about an out-of-this-world Roma side but we are eight points ahead of them and in the Europa League semi-finals. So find adjectives for us.

"It wasn't a title celebration at the end because there is still a chance for our pursuers. We have to seal it in the next match, I don't like anticipating things but we took a huge step forward."