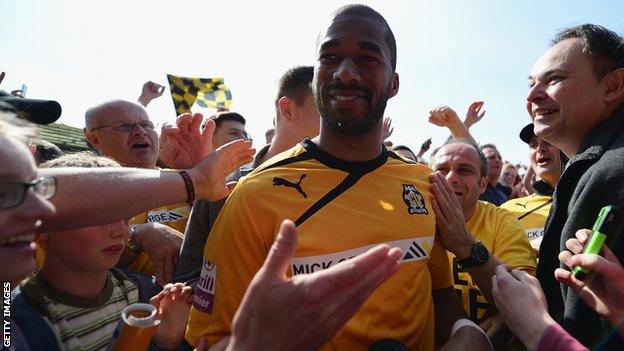 Sam-Yorke poked in on 11 minutes after Halifax, 1-0 up from the first leg, failed to clear and then raced away to slot his second just before the break.

Scott McManus went close to pulling one back from a tight angle.

Halifax keeper Matt Glennon made a great save from a Luke Berry header but Cambridge survived a late onslaught.

Richard Money's side have not been out of the Conference Premier's top two since the third game of the season.

Delano Sam-Yorke was sent out on loan earlier this season to Lincoln City (where he netted three times) but has now scored five goals since his return to the Abbey Stadium in March.

They now head to Wembley to face Gateshead, who beat Grimsby Town 4-2 on aggregate, in the final on 18 May.

It will be the U's third Conference play-off final in six years, having lost in 2008 and 2009. But they have experienced Wembley glory already this season, having won the FA Trophy final in March.

Halifax, searching for a third promotion in four years, came into the game with the narrow one-goal advantage provided by Lee Gregory's penalty in the first leg.

But that was wiped out in 11 minutes when Halifax failed to deal with a long ball and Tom Elliott capitalised, finding Sam-Yorke, who finished from five yards out.

And the forward added his second when he beat Chris Smith to a bouncing ball and charged through the Halifax defence before sidefooting past Glennon.

McManus could have levelled when he met an Adam Smith cross at the back post, but despite seeing plenty of the ball, the Shaymen were making few clear-cut chances.

Cambridge, dangerous on the counter, had a Josh Coulson header ruled out for offside and Glennon somehow kept Berry's effort out, diving down to his right.

Halifax bombarded the home side's area as time wore on, Scott Spencer and Matt Pearson both coming close, but the U's defence was resilient enough during a tense six minutes of injury time to seal their place in the final.