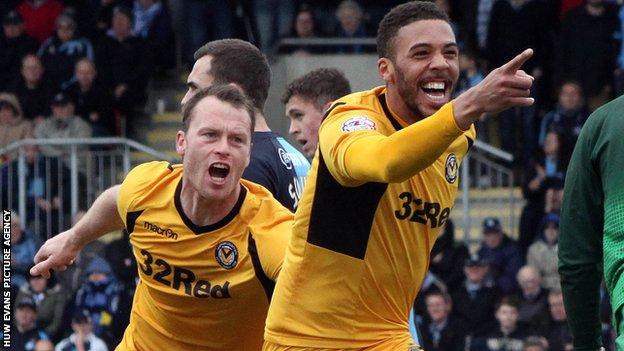 Nobody quite knew what to expect from Newport County's first season in the Football League.

But securing their league status after 25 years rising up the non-league pyramid was the main objective for manager Justin Edinburgh, in his first season as a Football League manager.

A 2-1 win on the last day of the season against League Two title contenders Rochdale, saw County seal a 14th-placed finish, providing another highlight in an eventful season.

After flirting with the promotion play-off places well into the new year, the club's challenge faded fast.

The 3-2 home win against high-flying Oxford United on 18 February left Newport eighth in table just three points off the play-off places with three games in hand.

That victory had been their first in seven games, but nine of their previous 11 matches had been played away from Rodney Parade due to drainage problems with the pitch.

But they had to wait nine matches until they won again in League Two 1-0 away at Torquay United.

Connor Washington, weighed in with seven goals, but attracted attention from League One Peterborough United who signed the forward in January.

Injuries and suspensions, particularly in key positions, hit the club hard and Edinburgh revealed that mistakes over player contracts influenced his team selection at times.

Despite the challenges, the Exiles recorded some impressive results against some of the top teams in the division.

Perhaps the most poignant result was the 2-0 away win at Portsmouth.

In 2008, Portsmouth were a Premier League team and won the FA Cup.

That season County played their fourth consecutive season in the Conference South, six tiers below Pompey.

This season Portsmouth had also been linked with Edinburgh but the former Tottenham defender said he was not interested in leaving Newport.

Jason Perry, BBC Radio Wales pundit and former Newport County assistant manager, thinks County had a very good season, although they have work to do before they return.

"Finishing mid-table is a respectable finish in their first season in the Football League," Perry observed.

"They made a great start. They took the momentum from their promotion into the Football League and of course being new to the league too, you catch a lot of teams by surprise.

"Newport did that playing a similar brand of football that proved to be successful for them in the Conference.

"They now know they are able to compete at this level.

"The weather kind of took the momentum away from Newport and worked against them... I think the opposition in League Two also worked them out too.

"Newport play a percentage game and can be very direct going forward. They look to turn the opposition full-backs and get their forwards in on goal.

"I do believe that at the end it became fairly easy for teams to defend against that style of play."

Perry felt bringing in Welsh international Darcy Blake had been a coup: "If they can hold on to him for next season it will be a great signing for them especially if he performs at the level he did for Cardiff City and Wales.

"As well as changing playing staff maybe Edinburgh will add some experience to his backroom staff."

Manager Edinburgh says he will always remember the season and he is delighted with the club's performance overall.

"What the club set out to do was to remain in the league and we've done that comfortably.

"Of course there's always downsides. Losing the momentum with the home games being called off, with the pitch getting in the condition it did, that was tough.

"I know that is the main reason why we found it hard the second half of the season.

"Momentum was key for us and we lost it. But credit to the players they overcame it and showed some consistency in the latter part of the season when questions were being asked of them.

"I'm delighted with everything from this season. The pitch and drainage will be sorted."

Edinburgh says he is very optimistic the club can improve next season.

"The strikers will benefit from a pre-season and we won't be coming into pre-season carrying over injured players from last season, he said.

"I think we'll look to bring in between six or seven new players.

"We've certainly been working tirelessly to improve every aspect of the club, from the training ground, travel, match day, recruitment, scouting

"If you don't do that you stand still and that hasn't happened since I've been here so we'll continue to strive and to better ourselves."

"I don't think there's a lot of emphasis on phases of play and shadow play and set plays and maybe that's something that he'll wish to develop and bring people in that are able to help with that," the pundit suggested.

"So this summer's going to be very big for Edinburgh to evolve the tactics, the style, as well as bringing in new players who can fit into his plans.

"It's about making the right decisions and bringing in the right players who will help Newport County evolve and be able to push ahead.

"If they don't then it could be another season of being in the middle of the table and you want to see progress every year.

"But ultimately it's those decisions on and off the field by the chairman and manager which will decide how successful they will be."