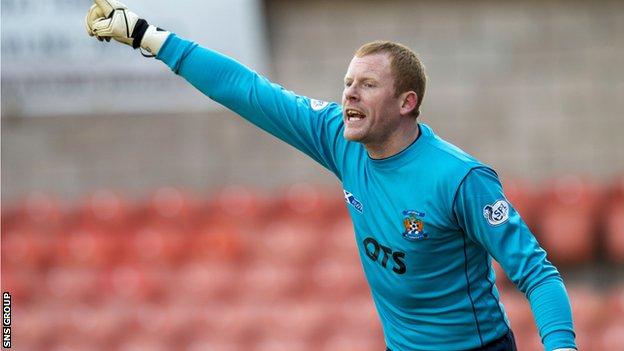 Goalkeeper Craig Samson is sure Kilmarnock can avoid the tension of a relegation play-off.

The Rugby Park side are 11th in the table but are just two points adrift of St Mirren in seventh place, with three games of the season remaining.

"We can help ourselves and win games," said Samson. "We don't need to rely on other teams; it's still in our hands.

"Yes, we are in the dreaded play-off position, but two points separate five teams, so everybody is still in there."

Kilmarnock have slipped down the Premiership following a run of three defeats.

Next up is a trip to already-relegated Hearts, with the Ayrshire side boasting a 100% win rate in the three previous meetings this term.

Killie have won on their last six visits to Tynecastle but the Edinburgh side are enjoying a good run of form, with four victories and a draw from their last five outings.

"We'll go to Hearts at the weekend trying to win and kick on from there," Samson told BBC Scotland.

"If we play well on the day, we can win. All the teams are much the same. There could be three teams in it by the last game of the season.

"But we've not been good enough in the last couple of games.

"Except for Hibs, all of the teams have been second bottom at some stage. Unfortunately, it's us at the moment.

"It's vital for this club to stay up. It's a brilliant community club with great facilities. It would be a disaster for us to go down."

Kris Boyd has scored six goals against Hearts this season and the visitors will be hoping he can continue that run on Saturday.

"We're delighted to have Kris but the team has got to do more to help him," added Samson.

Finnish playmaker Alexei Eremenko is back at Rugby Park for a second spell and he is also confident that a play-off against Championship opposition can be avoided.

"I'm almost 100% sure we are capable of avoiding the play-off spot and then we can start to think about next season," said the 31-year-old.

"It's a new thing for me. There are really small margins. One or two wins and we can be up to seventh, which is better than last year. More losses and we are down.

"Maybe after the season we can sit down and think about what went wrong but, for now, it's all about making sure we are all together."