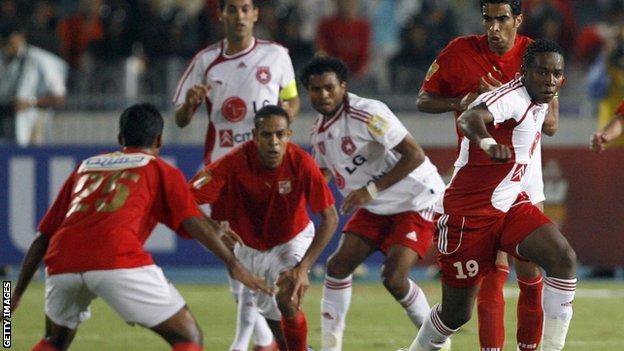 Egyptian giants Al Ahly have been drawn alongside Tunisians Etoile du Sahel in the group stage of the Confederation Cup.

The pair met in the 2005 Champions League final, with Ahly winning 3-0 on aggregate, and again two years later (pictured) when Etoile got their revenge with a 3-1 aggregate win to lift the trophy.

This year, Ahly are aiming to salvage their season having failed to defend their Champions League title, suffering defeat in the third round and dropping down to the second-tier competition.

Ivorians Sewe San Pedro and Nkana FC of Zambia, the two other sides in Group B, also dropped down from this season's Champions League.

Group A pits AC Leopards of Congo-Brazzaville - the 2012 Confederation Cup winners - against Cameroonian Coton Sport, who were Champions League runners-up in 2008.

Asec Mimosas of Ivory Coast, who are making their first appearance in a group stage of a major continental tournament since 2011, and Malian club AS Real Bamako complete the group.

The matches begin on the weekend of 16-18 May with the final ties to be played between 22-24 August the group winners and runners-up qualify for the semi-finals.