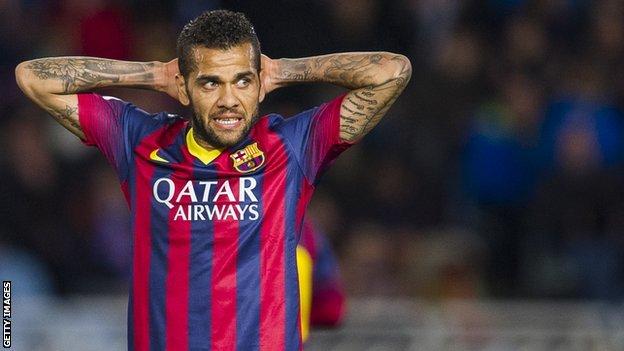 Barcelona defender Dani Alves says the fan who threw a banana at him during Sunday's dramatic 3-2 win at Villarreal should be publicly shamed.

Alves responded by peeling it and taking a bite before taking the corner, a gesture that drew praise from the world of football.

Villarreal said on Monday they had given the fan responsible a life ban.

"If I could, I would put a photo of the fan on the internet so that he would be shamed," said Alves, 30.

The defender also criticised Spain for its approach towards racism.

"There is racism against foreigners," he said in an interview with Brazil's Radio Globo. "They sell the country as being first world but in certain things they are very backward."

Manchester City's Sergio Aguero was one of a number of players to support Alves, posting a photo of him with Brazilian female player Marta eating bananas.

"I have been surprised by everyone's support," said Alves. "I did it without thinking. The world has evolved and we must evolve with it."