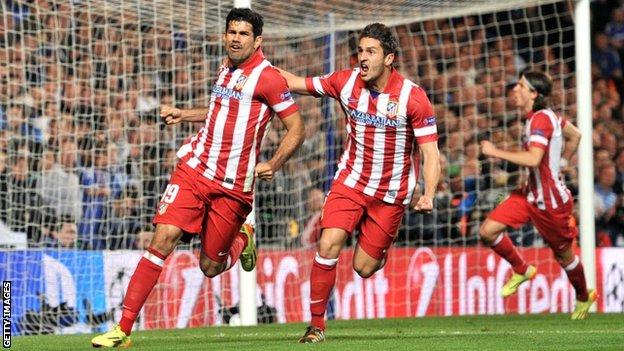 Chelsea's hopes of reaching a third Champions League final in seven seasons were ended as Atletico Madrid produced a stunning counter-attacking display at Stamford Bridge to set up a final against city rivals Real.

Jose Mourinho's side went ahead in the tie when Fernando Torres put Chelsea in front with a goal against his former club nine minutes before half-time.

But Chelsea allowed Atletico back into the match just before the interval, as Adrian Lopez scrambled home.

With Atletico ahead on the away goals rule following a goalless first leg, Chelsea needed to score to reach the Lisbon final but it was the Spaniards who struck again, Diego Costa putting them in front from the penalty spot before the excellent Arda Turan added a third with 18 minutes remaining.

At the final whistle, the visitors danced in front of their fans as John Terry stood in the centre circle and shed tears. It is the first time Atletico have reached a European Cup final since 1974 - and their meeting with Real will be the first time two clubs from the same city have ever contested the final.

For Mourinho and Chelsea, this had been an opportunity to exorcise the spirits of semi-finals past, not create more. To "ghost" goals, penalty shootouts, high-profile rows with Norwegian referees, add this painful defeat.

Mourinho had reached this stage of the competition in each of the past five seasons, but in that time has only managed to reach the final in 2010, when he won it with Inter Milan.

The script appeared to have been written for the Portuguese to return to Lisbon to face Real Madrid, the club he left amid accusations of failure.

Atletico had other ideas and a fairytale of their own to write. Central to their victory was the performance of their goalkeeper Thibaut Courtois, on loan from Chelsea. During a frantic second half, he denied Terry and David Luiz just as it seemed Chelsea might find a way back into the tie.

"The transformation from the moment Atletico scored the first goal was unbelievable. In the second half, Chelsea looked a different team. They lacked confidence and belief and seemed to be out on their feet."

There had been early warning signs for Chelsea, even though for much of the opening 40 minutes they had looked in total control.

Koke's fourth-minute cross drifted onto Mark Schwarzer's crossbar, but in the early moments it was Chelsea who threatened.

Torres led the line with purpose from the outset, playing with the kind of vim and vigour that he had in making his name in the red and white of Atletico. Willian curled a free-kick over the bar, before Luiz produced an acrobatic overhead kick that went wide.

Atletico came into the game on the back of a ninth successive La Liga win, with a sixth successive clean sheet. It took a former idol to break that streak as Torres fired Chelsea in front after 36 minutes following fine work by Willian and Cesar Azpilicueta wide on the right. Torres raised his hands as if to apologise to the travelling supporters who once idolised him.

But within eight minutes Atletico were back in the tie, as Chelsea switched off with half-time approaching. Tiago floated a ball to the far post, where an unmarked Juanfran pulled it back across for Lopez to stroke into an empty net. It was the classic sucker-punch.

Worse was still to come for Chelsea. Substitute Samuel Eto'o collided with Costa in front of the referee. The Spain international stepped up and buried the spot kick to silence Stamford Bridge.

With Chelsea needing to push for a goal of their own, wide open spaces began to appear for Atletico and they took full advantage.

This was a counter-attack as decisive and devastating as the ones perfected by their city neighbours at Bayern Munich on Tuesday. Koke's cross from wide on the right found Turan charging at the back post. His initial header was tipped onto the bar but the Turk followed up to ram home the rebound and put the result beyond doubt.

Mourinho turned to his staff, knowing the game was up.