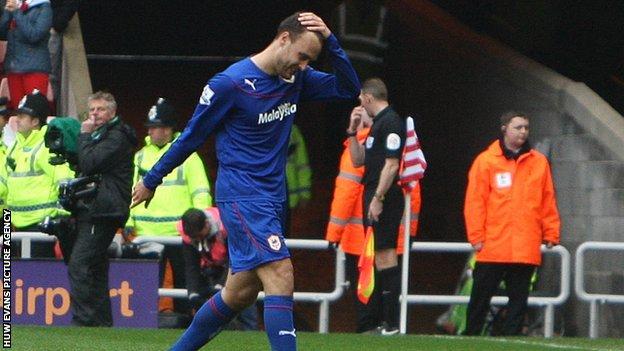 Cardiff City defender Juan Cala has been charged with improper conduct by the Football Association.

The Spanish defender has been in charged in relation to an alleged incident in or around the tunnel area after his side's 4-0 defeat at Sunderland last Sunday.

Cala, 24, was sent-off after a professional foul on Connor Wickham.

The former Sevilla player has until 18:00 BST on Thursday, 1 May to respond to the charge.

Cala was shown a red card by referee Phil Dowd for pulling back Wickham as the Sunderland striker looked to get clear on goal.

The centre-back is then alleged to have been involved in an incident as he went down the tunnel at the Stadium of Light.

Having already been set to serve a suspension for Saturday's Premier League match at Newcastle, should the charge be proven, then Cala would also miss the final game of the season, at home to Chelsea.

Cardiff are currently bottom of the table and could be relegated if other results go against them this.