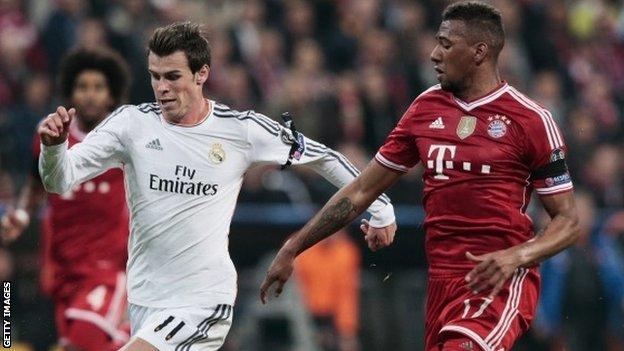 Real Madrid forward Gareth Bale said reaching the Champions League final shows why he chose to swap Tottenham for the Bernabeu in the summer.

The Welshman, who joined for a record £85.3m, helped Real beat holders Bayern Munich 4-0 to seal a 5-0 aggregate win.

"This is why I came to the biggest club in the world - to win trophies and play in massive games," Bale told ITV.

"It's a fantastic result for us. We've been working hard, got our tactics right and deserved the win."

Leading 1-0 from the home leg, Real went 3-0 up on aggregate through two Sergio Ramos headers before Bale set up Cristiano Ronaldo for a third on the break.

A late Ronaldo free-kick rounded off Real's first victory over Bayern in Munich and booked their first appearance in the final since 2002.

"They always leave space on the counter-attack, which we like because we have quick players and were able to exploit that," added Bale.

Real boss Carlo Ancelotti, who coached AC Milan to the European title in 2003 and 2007, described his team's performance as "perfect".

"You dream of a perfect game - the first half was great for us," he said. "The team has a great spirit for working for each other.

"Reaching the final after 12 years was a big target and it makes me proud that I did it with the team. When I arrived at Real, you could feel something special in the air, there was a special atmosphere.

"The performance of the team was fantastic and we hope we have the same attitude in the final."

Ramos added: "Today Madrid have gone to a level that will be recognised across the world and to score two goals is a dream."

Bayern chairman Karl-Heinz Rummenigge was scathing about the performance of the Bundesliga winners and defending European champions.

"We have witnessed a debacle - we didn't put enough passion into it," he said. "We have to keep our nerve and stay rational."

In the final on 24 May in Lisbon, Real will face either Chelsea or Atletico Madrid, who are level at 0-0 going into Wednesday's second leg at Stamford Bridge.

"We still haven't won it yet," said Bale. "We have a difficult game in the final whoever it may be, but I'm looking forward to it."