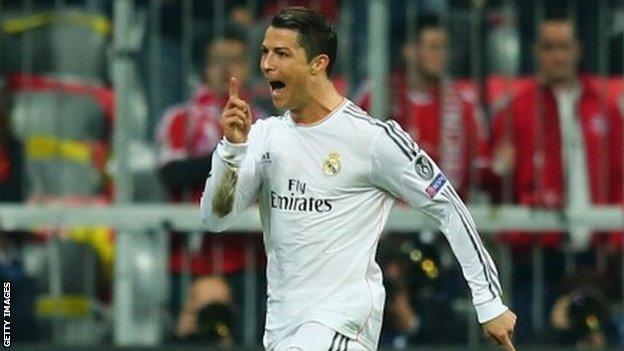 Cristiano Ronaldo broke the record jointly held by Lionel Messi for the most goals in a Champions League season as Real Madrid thrashed Bayern Munich to book their place in the final.

"The defeat was a humiliation for Bayern, and the result will increase the pressure on Pep Guardiola amid the growing feeling that, despite winning the Bundesliga, he has not delivered the progress his employers were expecting."

The Portuguese forward, 29, scored for the 15th and 16th times in Europe this season as Real won 4-0 at the Allianz Arena, 5-0 on aggregate.

He broke the record when he swept home following a swift counter-attack.

He then extended the landmark with a low free-kick in the 89th minute.

The ex-Manchester United forward has now scored 67 goals in his Champions League career, the same number as Messi and four shy of the record which is currently held by former Real and Schalke striker Raul.