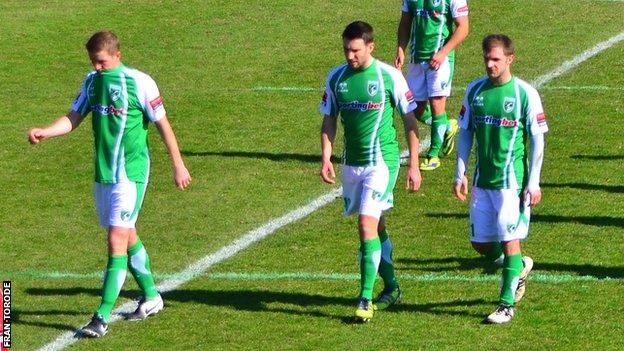 Guernsey FC failed to win a third successive promotion after losing 3-2 to Leatherhead in their Isthmian League Division One South play-off.

The Green Lions went a goal down in the opening minutes as Darren Smith struck before team-mate Tom Bradbrook scored either side of half-time.

But Guernsey fought back from 3-0 down as Marc McGrath and Dave Rihoy scored in the final 10 minutes.

Matt Loaring also had a goal disallowed as the Green Lions tried to level.

"I'm really disappointed with the start because that's what we spoke about in the build-up, that's what they do , they'd play direct," manager Tony Vance told BBC Radio Guernsey.

"Ninety seconds in they do it to us and we gave ourselves a mountain to climb after that.

"They deserved to win the game, it's as simple as that, and at least we pulled some respect back in at the end and nearly pulled off a miracle, but that's what it would have been to be honest."

Guernsey FC were only formed in 2011 and have won promotion in each of their first two campaigns to make it to step four of the English football pyramid.

"We're incredibly proud as a young football club to have come as far as we have done in such a short period of time," said chairman Steve Dewsnip

"In only our third year of existence to effectively be knocking on the door of the Ryman Premier League is something that we should all, not just as a football club, but as an island, be very very proud of."