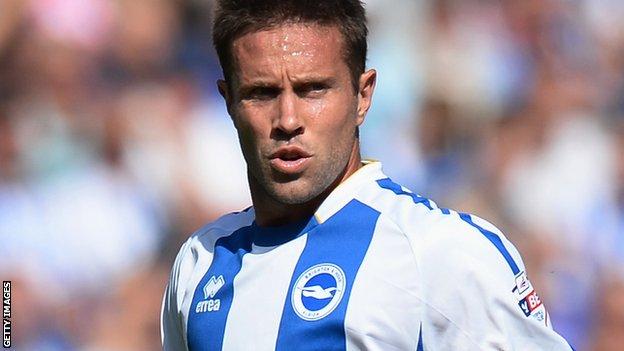 Brighton's Matthew Upson says they must keep their composure in Saturday's vital game at Nottingham Forest.

Albion will clinch a Championship play-off spot if they get a better result on the last day of the regular season than sixth-placed Reading, who face Burnley.

"We have to play with intensity but composure and not get flustered," defender Upson, 35, told BBC Sussex.

"We've just got to go out and leave everything on the pitch and what will be will be."

Upson added: "We've got to have a real bite about our play, which at this stage of the season is quite difficult as there are some tired legs and we've played a lot of games.

"You have to really maintain that focus. We've got to be really focused and make good decisions.

"We'd love to win the game and then we've done everything we can to force the issue.

"It's a little bit out of our hands in terms of the Reading result, but it's a massive game and we've just got to approach it in the right way."

The former England international, who has had spells at Arsenal, Birmingham, West Ham and Stoke, has been a key player for Albion since joining last year, initially on loan.

He has been voted the club's player of the year - the first time he has won such an award in his career.

"To get that kind of recognition of what you've done over a season is important and it's very rewarding that people have appreciated what you've done and that you've worked hard to try and maintain a level of performance over quite a long period."

Midfielder Rohan Ince was voted the Seagulls' young player of the year following an impressive first season at the Amex Stadium.

Signed on a free transfer from Chelsea last summer, the 21-year-old has made 32 appearances this season but believes he can still contribute more.

"I've come a long way and couldn't ask for more. My highlights were scoring a goal against Port Vale and obviously winning this award.

"I bring a lot of power to the midfield, so I can win a lot of aerial battles and try to dominate in midfield.

"But next season I'm going to try to provide more from an attacking perspective, take more shots and hopefully get more goals."