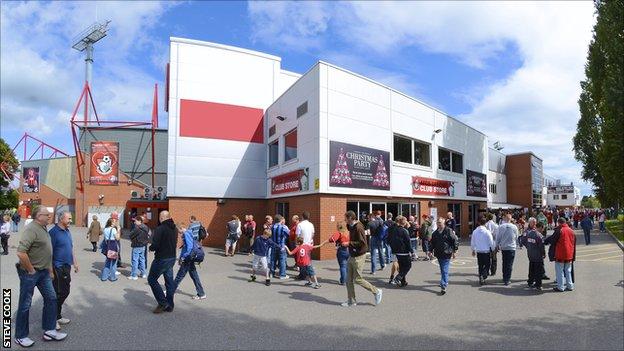 AFC Bournemouth lost £15.3m in the financial year ending July 2013, the season in which they were promoted to the Championship.

With robust systems now in place, we are convinced, going forward, we will be able to reduce costs whilst maintaining our commitment to the success of the team on the pitch

The Cherries' Russian owner Max Demin helped ease the financial burden with a loan of £8.7m, according to accounts filed at Companies House.

Bournemouth also owe a company controlled by Demin £7.5m, which is due by 5 October this year.

The period saw Bournemouth bring manager Eddie Howe back to the club as they secured promotion to the Championship for only the second time in their history.

Bournemouth chairman Jeff Mostyn admitted the figures were "disappointing" but added it had to be put into "perspective" and reiterated Demin's commitment to the club.

"We have an extremely ambitious owner, board of directors and manager who were all focused on gaining promotion to the Championship," Mostyn said in a statement.

"As is the case with any business, success requires investment. That is precisely what we embarked upon, and the end justifies the means.

"The greatest significance going forward is the changes in the club's ownership and management. We now have one owner and a board of directors all singing from the same hymn sheet, all pulling in the same direction with one common goal, success for the club.

"With robust systems now in place, we are convinced, going forward, we will be able to reduce costs whilst maintaining our commitment to the success of the team on the pitch.

"It is important to remember we are in this for the long term; that statement is more than justified by the owner's past investment and his ongoing commitment to the club."

New Financial Fair Play rules mean the Cherries must almost halve that £15m loss by December of this year, or face transfer restrictions.

In their directors' report, the club's holding company AFC Bournemouth Limited said: "The club's future strategy is to become sustainable and forward-looking, implementing strategy that minimises both risk and exposure.

"One of the key risks affecting the company is the achievement of playing success in order to maintain the club's Championship status."

The report went on to admit that "football wages continue to be the highest expense for the club" and Mostyn added there had been significant investment in other key areas of the football club.

"In addition to strengthening the squad, we had a change of management team, a new club shop and state of the art training pitches built," he said.

"We also invested heavily in our first team's support, employing a team of top quality analysts, sports scientists and medical staff. We use medical facilities amongst the best in Europe, which has enabled our injured players to return to the squad in record breaking time.

"We also have in place an international scouting network, keeping the manager aware of opportunities in the transfer market."