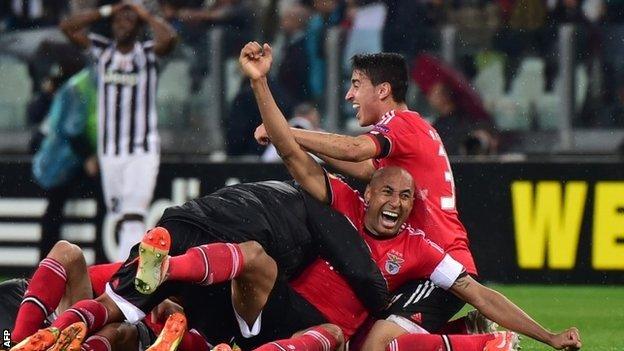 Ten-man Benfica survived a surge of late Juventus pressure to secure a goalless draw and advance to their second successive Europa League final.

The visitors' Enzo Perez got a second yellow card on 67 minutes, but Juve could not make the extra man count.

On-loan Dani Osvaldo had a goal ruled out for offside before Martín Caceres's header was pushed away by Jan Oblak.

Benfica's Lazar Markovic and Juve's Mirko Vucinic were dismissed from the bench after an injury-time scuffle.

Markovic, along with Salvio who is suspended after picking up a booking, will be missing when the Portuguese champions return to Juventus Stadium on 14 May for the final against Spanish side Sevilla.

Juventus went close to the goal that would have ensured them a 'home' final and a chance to land their first piece of European silverware since their 1996 Champions League success.

But Carlos Tevez volleyed over before defender Luisao got back to divert Arturo Vidal's effort over from beneath his own crossbar in the first half.

The pressure only intensified in a second half played in heavy rain.

The Lisbon side had a rare chance when Rodrigo snatched at a shot after being put through on the right, but were forced to defend deep and in diminished numbers when Perez was sent off for his needless foul on Vidal.

Jorge Jesus's side held out, however, and the possibility of a first European trophy in 52 years, as well as a remarkable quadruple with two domestic cup final appearances to come, remains alive.