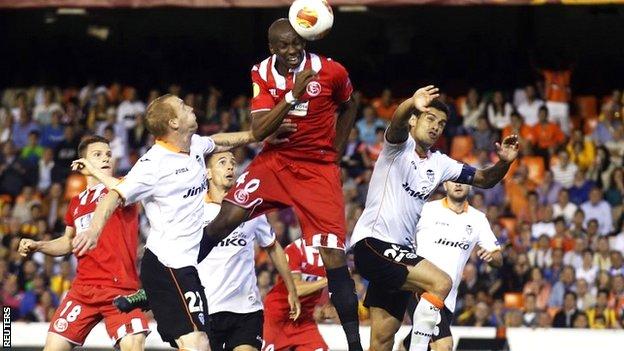 A Stephane Mbia header in the fifth minute of added time sent Sevilla into the Europa League final on away goals at the expense of Valencia.

Having won the first leg 2-0, Sevilla were pegged back to 2-2 in 26 minutes by Sofiane Feghouli's deflected strike and an own goal by goalkeeper Beto.

Jeremy Mathieu's fierce shot after the break put Valencia ahead in the tie.

But Mbia, on-loan from QPR, powered in to send Sevilla through to face Benfica in Turin on 16 May.

Valencia looked favourites to head back to their first final since winning the former Uefa Cup in 2004.

Feghouli lashed home a left-foot opener that took a slight deflection off a defender and it was all square on aggregate when a Jonas header was pushed onto the underside of the bar by Beto only for the ball to ricochet off the goalkeeper's back and into the net.

The home side, who overturned a 3-0 deficit in the previous round against Basel by winning the return leg 5-0, continued to dominate as Mathieu fired into the roof of the net after a loose ball fell perfectly for the French defender from a corner.

However Sevilla secured their first European final since winning a second straight Uefa Cup title in 2007 as Mbia rose at the far post after Federico Fazio flicked on from a long throw.