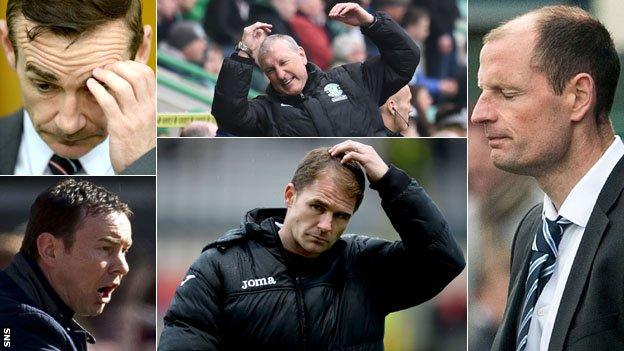 With three games remaining - and bottom-placed Hearts already relegated - time is running out for St Mirren, Hibernian, Ross County, Partick Thistle and Kilmarnock to win the points that will bring relief from the fear and anxiety of an end-of-season contest with a Championship side.

BBC Scotland examines the strengths and weaknesses of each team, the joker in their squad that could prove pivotal, and their chances of avoiding the play-off position.

Among the contenders, they have the best form, being unbeaten in four games. That run has lifted the mood of the players and the support, so the focus has begun to shift to the prospect of the Paisley side finishing seventh in the Premiership, their highest placing since the Scottish Premier League was formed in 1998.

There is a solidity to St Mirren, and a settled nature to the side, all of which provides the basis for their consistency. Steven Thompson has been leading the line robustly and for all that centre-backs Darren McGregor and Marc McAusland can be hesitant at times, there is stability in defence.

There is not enough strength in depth to replace the key players. Thompson tends to be substituted during the second half of games to preserve his fitness, while Jim Goodwin's reputation for uncompromising tackling - and his occasionally rash attempts to win the ball - tends to make the midfielder a focus for the match officials, and opposition players and fans. He was sent off in the recent 2-0 win over Hibernian, but following an appeal on Thursday and it has been be downgraded to a yellow card.

Kenny McLean has found a rich vein of form at the right time. The midfielder is deft on the ball, can be an attacking presence in the box and brings dynamism to St Mirren's play.

They have the strongest squad, at least in terms of budget and potential ability, although they seem drained of confidence and self-belief. For several weeks now, one victory was likely to be enough to save the Easter Road side, and that remains the case. There is experience in the likes of Kevin Thomson and Michael Nelson, as well as youthful endeavour in Sam Stanton and Alex Harris.

Hibs ought to have enough to earn that crucial victory, but only if they can pull everything together at the one time. That has so far eluded them under Terry Butcher.

Despondency has settled upon the club. Butcher has at times seemed bemused by the team's failure to respond to his management, and the chopping and changing of the line-up reflects his own doubts about the abilities of the players, both individually and collectively.

He has been unable to find a suitable blend, and they have the worst run of form in the bottom six, with six consecutive defeats. There was some residual fight in the derby defeat to Hearts, but mostly Hibs have looked unable to rouse any resistance, and they have the lowest goal tally of the contenders. There seems a lack of unity in the dressing room.

Sam Stanton is a young attacking midfielder who can play with the freedom and exuberance to ignore Hibs' plight. With goals proving hard to come by, his late bursts into the penalty area could be crucial.

There is a grittiness to County, an abrasiveness and sense of defiance that is redolent of manager Derek Adams. Form has been elusive, but they have always been capable of digging out important performances and victories when the occasion demands.

Several signings were made last January to try to ward off this situation, but integrating the new players has taken time and it remains the tried and tested figures, like Richard Brittain, upon whom the team still rely heavily.

Clean sheets tend to evade County, and that leaves them vulnerable to dropping points at this crucial stage in the season. Adams has tended to create a siege mentality - he recently bemoaned decisions going against his side this season because they are "a small club from the Highlands" - but that has not always protected them for their infallibilities. The erratic nature of County's form means they are always capable of a slip-up as much as the occasional vital win or draw.

Melvin de Leeuw has been in goalscoring form in recent weeks, but can also be a creative force for County. He is able to be decisive and elusive, although can also be inconsistent.

Thistle have remained committed to a considered, constructive style of play. Even as the team were sucked into this battle, there has been no reverting to a different, less measured style. That ought to serve them well in the remaining fixtures, since it reflects an underlying confidence.

Manager Alan Archibald also exudes an air of quiet assurance and Thistle's doggedness is a virtue at a time when teams need nerve as much as ability.

A lack of goalscoring prowess and poor home form has held Thistle back this season. The signing of Lyle Taylor last January brought more of a cutting edge, and Thistle eventually broke their home duck in the league with a 3-1 win over Aberdeen last February, but they have won only one of their four home games since. Their last match of the season is at Firhill, against Ross County, which could be pivotal.

Attacking midfielder Kallum Higginbotham has been in sparkling form in recent weeks and seems inspired by the challenge of trying to keep Thistle up. Bright and quick-witted, he can provide a spark of creativity.

Kris Boyd. Without the striker's goals, and his ability to lead the line with enough nous and threat to trouble opposition defenders, Kilmarnock would probably be further adrift. Boyd has scored 20 goals this season and his presence provides a sliver of comfort for Kilmarnock that a game can still be rescued or won with a single intervention if he is on the pitch.

Others still need to contribute, but Boyd's experience and confidence are a reassurance to the Rugby Park side.

No side in the bottom six have conceded more goals than Kilmarnock. There has been a flakiness to Allan Johnston's team all season and the failure to eradicate it has been costly. With only two wins in their last 10 games, Kilmarnock are playing like a side in fear of their fate.

Even securing the club's financial future, with a debt reduction deal that involved the ownership of the hotel adjacent to the ground changing hands, has not restored an air of optimism. This is still a fraught time for the Ayrshire club.

Alexi Eremenko is the most naturally gifted player in the bottom half of the table and, despite his lack of match fitness, he is capable of moments of aplomb. One flash of genius could be enough to liberate the team.