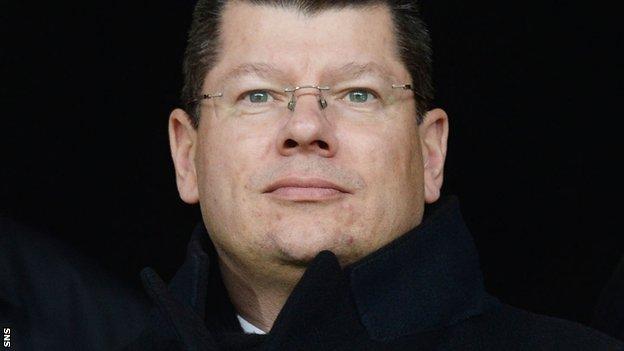 Kilmarnock will face no further action after the Scottish Professional Football League investigated an allegation of forgery.

The SPFL looked into a complaint that a Rugby Park player's signature had been falsified on a contract in March.

And the governing body's chief executive Neil Doncaster said "a comprehensive examination of documentation" had been undertaken.

Killie chairman Michael Johnston spoke of his "great relief" at the outcome.

It's a great relief to have the matter concluded

"A complaint was made to the SPFL by a former employee of Kilmarnock FC regarding an alleged falsification of a signature on a document intended to be submitted to the SPFL," said Doncaster.

"An SPFL investigation into this allegation, including an interview with the complainant and a comprehensive examination of documentation, is now complete.

"The SPFL has concluded that it can identify no document which included a falsified player signature or to have been otherwise irregularly completed by the club.

"The SPFL intends to take no further action on this complaint."

Kilmarnock chairman Michael Johnston admitted on BBC Radio Scotland's Sportsound that the matter had been "a serious concern" but remained confident the club would be "vindicated".

"We just had to sit quietly and let things take their natural course, which was very frustrating for the staff who had allegedly been involved in wrongdoing," he explained.

"My sympathy goes out to the staff who have had to have a very stressful wait while the SPFL conducted a very thorough investigation.

"As I expected, they've come up with absolutely nothing. It's a great relief to have the matter concluded."