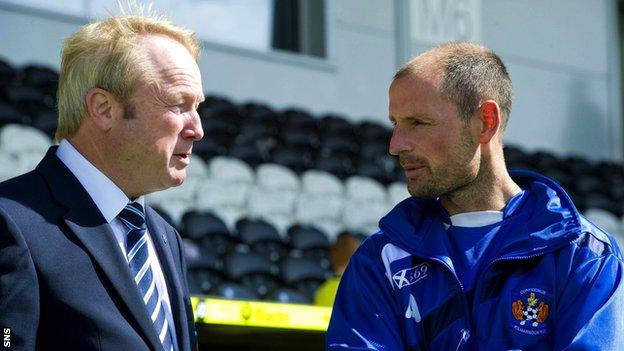 The team finishing 11th this term will enter a two-legged tie with one of the top sides from the Championship.

"That's what we'll be seeking to do with three good results over our remaining fixtures against Hearts, St Mirren and Hibernian."

"Being in 11th place is far from being relegated and a lot of people are pressing the panic button a bit too soon.

"[Kilmarnock boss] Allan Johnston was manager of the season and had great success with Queen of the South. He's had a difficult season in his first season as a manager in the Premiership but I'm fully confident, as is he, that we can pull ourselves back up the table an the encouraging thing is that we're only two points away from seventh place.

Johnston announced last month a deal had been struck to clear the club's £9m bank debt. As part of the arrangement, Johnston will step down as chairman.

"The club is in a sound financial position," he explained.

"The debt restructuring has been completed and the club has no bank debt and no director's loans and is effectively debt free. The club is now in a much stronger position to plan ahead.

"It's been nine years at the helm. We had £14m of debt when I took over. It's now reduced to nil. That was my long-term objective but it has been a tough stint so I'll be quite happy to have someone else come forward.

"I intend to remain on the board as a director and the company secretary. I'm effectively the chief executive of the club and so I'll continue in that role for the foreseeable future."