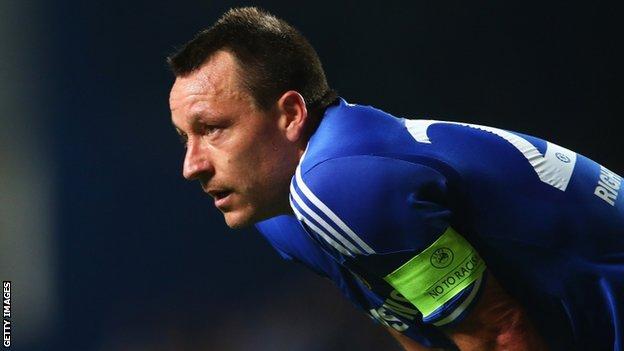 The abiding image of this most painful of defeats was all too familiar for Chelsea fans.

As the final whistle blew to signal Chelsea's elimination by Atletico Madrid at the semi-final stage of the Champions League, John Terry stood alone in the centre circle, tears running down his cheeks, pain etched on his face.

Chelsea supporters had long since made for the exits on an evening when they were well beaten - 3-1 on the night and on aggregate - but as Terry stared into the stands it was clear he was considering the fact that, at the age of 33, he may never again play in a Champions League final.

This was, after all, the fifth time he has tasted defeat in a Champions League semi-final. He will tell himself there will be another chance, but there can be no guarantees.

Terry has begun talks over a new contract to stay at Stamford Bridge and those will be prioritised now. The likelihood is he will take his place at the heart of Chelsea's defence next season, but with new faces expected, nothing is certain on that count either.

There was emotion everywhere you looked at Stamford Bridge - it was that kind of night.

Jose Mourinho lingered to shake hands with his counterpart, Diego Simeone. There was an embrace too with David Villa, an unused substitute, and a wry smile for members of the Atletico coaching staff. The Chelsea fans had sung their manager's name with the side trailing 3-1. The Special One could only respond with a timid wave of his right hand and afterwards held his hands up and admitted he had been out-thought.

This was the fourth time in succession Mourinho has lost at the semi-final stage, with none of the previous defeats as comprehensive or as crushing.

The focus at the end, though, was on Terry. He was the last Chelsea player to leave the field, glancing up at the banner that proclaims him captain, leader, legend. Tiago, his former team-mate, threw an arm around him but Terry was feeling a pain he had felt before.

There are those who will tell you he has found peace with the Champions League, that the memories of missing in the penalty shoot-out that decided the 2008 final against Manchester United in Moscow have been exorcised.

He did, of course, lift the trophy at the end of Chelsea's victory over Bayern Munich at the Allianz Arena in 2012. But he was suspended that day and watched the game from the stands before putting on his kit to lift the trophy.

Publicly he insists there is no void to fill and yet, on this evidence, something is still missing. Perhaps there was a part of him that felt he should not have been involved at all. A pain-killing injection in his ankle had been needed to get him on the field, but his familiar and formidable partnership with Gary Cahill never quite clicked. Something wasn't right.

At times he looked stretched by the pace of Atletico's counter-attack. He was wrong-footed and caught out of position for the equaliser as Adrian Lopez scored a crucial goal just before half-time.

What must have made it even harder for Terry to swallow was that it could all have been so different if the 61st minute of the match had gone Chelsea's way and not Atletico's.

It was Terry himself who strode forward at that crucial point in the match and headed the ball towards goal. It looked destined for the net, only for Thibaut Courtois to produce an apparently "impossible" save diving low to his left.

Within a minute, Atletico won a penalty as Samuel Eto'o crudely fouled Diego Costa - the rest was academic.

All is not lost, however. Terry has been one of the most consistent performers in the Premier League this season and, without a World Cup to distract him this summer, will return fresh and feisty for the new season.

For now, though, the agony goes on.