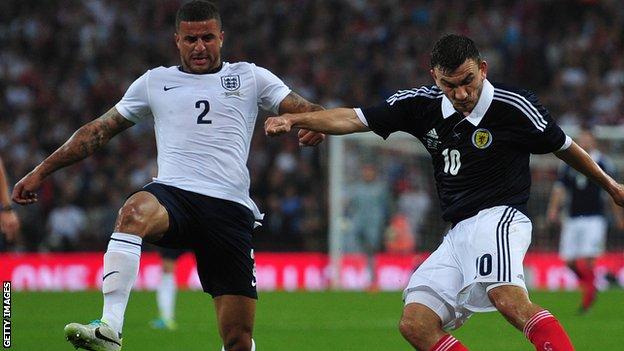 England right-back Kyle Walker could miss the World Cup because of injury.

The Spurs player, who has won 10 caps, was expected to compete with Liverpool's Glen Johnson for a place in the England team this summer.

However, the 23-year-old has not played since suffering a pelvic injury against Benfica on 13 March.

"We haven't been told for certain that he will be out for the next six to 10 weeks but we are concerned," said England manager Roy Hodgson.

"I know he has had another injection. We are waiting to find out whether that helps. He has not been fit for a long time."

If Walker misses out, Hodgson could turn to Liverpool's uncapped defender Jon Flanagan, 21.

Tottenham's Andros Townsend has already been ruled out of the summer showpiece in Brazil with an ankle injury, joining Arsenal forward Theo Walcott and Southampton striker Jay Rodriguez on the sidelines.

But Hodgson is hopeful that Everton centre-half Phil Jagielka and Arsenal midfielders Jack Wilshere and Alex Oxlade-Chamberlain will be fit.

"Jack Wilshere has been training for the Arsenal team for a while," added Hodgson. "I spoke to Arsene Wenger, who said he was holding him back.

"And from my conversation with Arsene, I don't think there is too much to worry about with Oxlade-Chamberlain either."

Talking about Jagielka, Hodgson said: "We have had good reports back for the last few weeks. Everton were keen not to throw him back in before his injury is 100% right. We don't have any fears he won't be fit."

England's 23-man squad will be named on Monday, 12 May. They begin their World Cup campaign against Italy on 14 June.