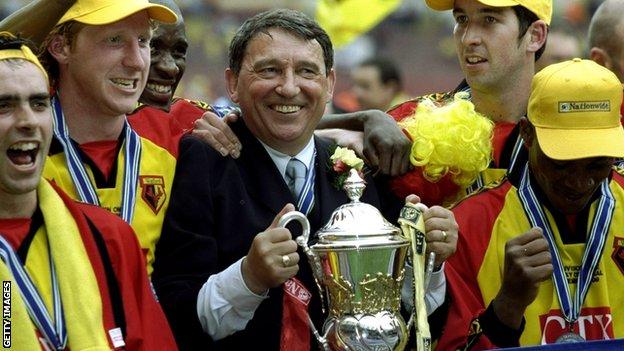 Watford are to rename their Rous Stand at Vicarage Road after former manager and chairman Graham Taylor.

Ex-England boss Taylor, 69, led the Hornets from the fourth tier to second place in the top flight during a first spell as boss between 1977 and 1987.

He returned in 1996 and brought Premier League football to Vicarage Road for one season.

"I feel truly honoured that Watford would seek to recognise my time at the club in this way," he said.

"As everybody is very well aware, I spent a big part of my working life at the club and as part of the town and its community.

"What we created, among the success on the field of play, was a very special feeling - the memories of which have always remained with me.

"It will certainly feel strange coming to future Watford home matches and sitting in a stand named after myself, although it's something that myself and my family can take immense pride in. So I would thank everyone at the club most sincerely for this wonderful gesture."

Taylor was England manager between 1990 and 1993, but quit after failing to qualify for the 1994 World Cup.

He also took charge of Aston Villa twice, Wolves and Lincoln City and returned to Watford in 2009 in the role of chairman, a position he relinquished two years ago, although he remains a life president.

The Rous Stand is currently named after Sir Stanley Rous, a former sports teacher in the town who was an international referee and Fifa's president between 1961 and 1974.

"It's always been our intention to honour one of the club's greatest servants and renaming the Rous Stand is hugely appropriate," said Watford chief executive Scott Duxbury.

"We intend to permanently reserve two seats, for Graham and his wife, Rita, within the directors' seating area in a stand which already contains the Sir Elton John Suite."

John, a hugely successful musician and a former owner of Watford, appointed Taylor as manager in 1977.

"Both men are synonymous with a special time in the club's history, so we feel this is a fitting tribute," added Duxbury.