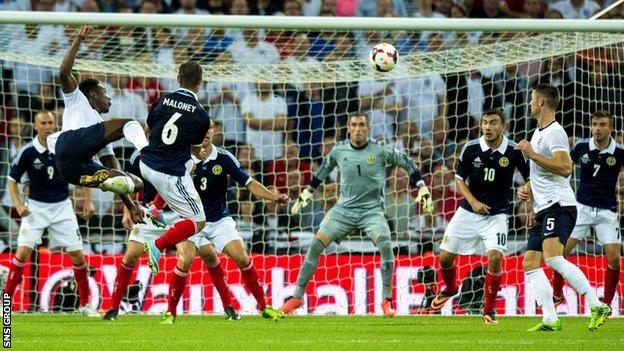 The Scottish FA is in talks with its English counterpart over a potential friendly later this year following the 2013 meeting at Wembley.

"When it's infrequent and important it works absolutely brilliantly," Nevin told BBC Scotland.

"However, I know how boring it can get and players then turn off the fixture and don't turn up."

At this stage there are no plans for the fixture to return on an annual basis.

England's 3-2 victory at Wembley in August attracted a capacity crowd, with more than 20,000 Scottish fans attending.

The first meeting between the nations in nearly 15 years was part of the Football Association's 150th anniversary celebrations.

The home international series was discontinued in 1984 and the annual meeting of world football's oldest rivals was abandoned five years later following the short-lived Rous Cup.

"There was a big problem in that so many of the players knew each other very well and it was played at the end of the season when most of the guys wanted to be on holiday," he recalled.

"I spoke to a number of the English guys and the last thing they wanted was to be playing a friendly when they were exhausted - maybe just played in a cup final.

"The calendar is so full at the moment that it would probably be even worse now.

"You don't want it to be a friendly that means nothing, with B-sides playing against each other.

"If you do it really regularly, they will get a bit bored with it and they'll think there are more important things like the Champions League and qualifying for World Cups and then it will become the problem that it was previously.

"The odd friendly and competitive games; I'm still up for it but regularly? Just be careful."

Terry Butcher lined up against Nevin for that last Rous Cup game in Glasgow and the Hibernian boss is delighted at the prospect of the old rivalry being revived.

"It's a great fixture and I would welcome it back," he told BBC Scotland.

"I was at the last game at Wembley and certainly enjoyed it. It was competitive and it was fierce.

"It was a great spectacle and brought back memories of when I played against Scotland.

"It was a part of my upbringing and I think it should be a part of the upbringing for future generations as well."

The most likely date for any friendly in Glasgow is 18 November, when both nations will be well into their Euro 2016 qualifying campaigns.

Scotland will be frustrated onlookers during the summer's World Cup but hopes of reaching a first major tournament since 1998 have been boosted by Gordon Strachan lifting the side to 22nd in the world rankings and the new 24-team format for the next European Championship.

"I'm not sure it would be a distraction this time because the players need big games," added Nevin.

"And because it's not a regular fixture the Scots will be up for it and Gordon needs to get his group together as much as possible.

"It's been a good run and everyone seems positive about playing for Scotland at the moment."