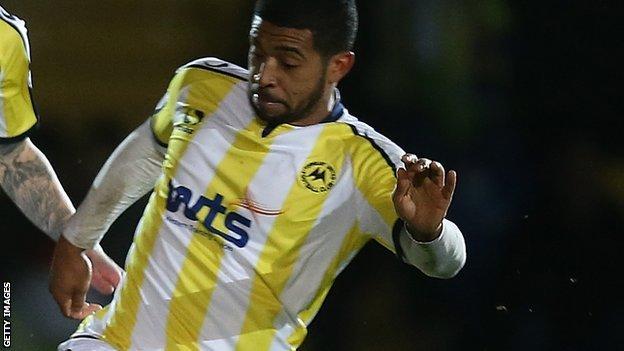 Labadie was suspended in March after the incident at Chesterfield, but has been on full pay at the Gulls since.

"We haven't been able to use a good player but we've been paying his wages," Hargreaves told BBC Sport.

"So on that score there's no justice. We've been paying a considerable amount of money and had nothing for it."

Torquay were relegated to the Conference Premier on Saturday despite winning 3-1 at Mansfield.

Labadie, who has been unable to play in the Gulls' final 10 games of the season, originally joined on loan from Notts County before making the move permanent in January.

He made 31 appearances for Torquay this term before the ban came into effect.

The 23-year-old was also fined £2,000 for the incident and had lodged an appeal with the Football Association before withdrawing it less than 24 hours later.

"The fact that Joss didn't want to appeal was a sign of guilt," added Hargreaves. "That meant he took the ban and unfortunately we've been paying his wages.

"It's very frustrating because that's a lot of money."

Internal disciplinary proceedings are only just ending over the incident but Hargreaves says that it is no consolation for losing a member of his squad.

"It's just coming to a conclusion now. But it's late in the day and we haven't got the services of that player for nigh on two months."