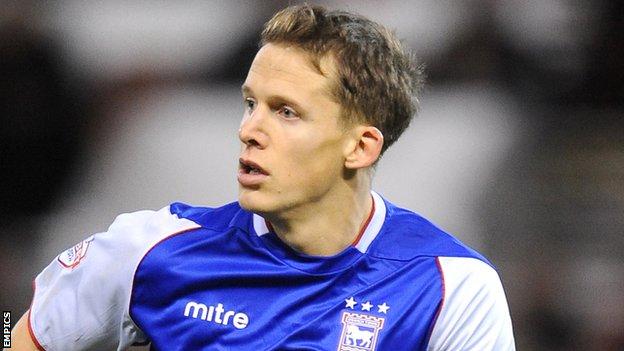 Ipswich Town defender Christophe Berra believes they should be proud of their season despite missing out on a place in the Championship play-offs.

Mick McCarthy's team were in contention until last week's loss to Burnley.

"We had ambitions to be there. But you have to remember the gaffer has done a great job on a small budget," Berra told BBC Radio Suffolk.

"We've probably punched above our weight, but that's down to good characters and a good coaching staff."

Ipswich, who finish their season against Sheffield Wednesday on Saturday, are currently 10th in the table and guaranteed their highest finish since coming ninth in 2009, despite McCarthy working under a reduced budget at Portman Road in an attempt to satisfy Financial Fair Play rules.

The club have not paid a transfer fee this season, with McCarthy bringing in free signings and loanees.

Former Wolves centre-half Berra arrived on a free transfer last summer and the 29-year-old has gone on to play 44 games, scoring five goals, and re-establish himself in the Scotland side.

However, with only 12 months left on his contract, he is yet to discuss his future in Suffolk.

"I've been in the situation before. I've enjoyed my football this season and I've played well," he added

"But I'm looking forward to the last game and when talks come along we'll deal with it."