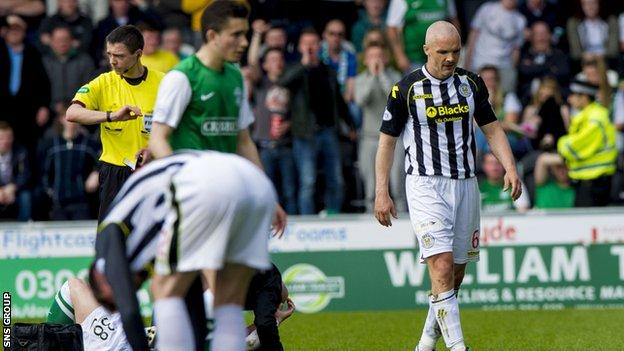 St Mirren captain Jim Goodwin has had the red card he was shown against Hibs on 19 April reduced to a caution, therefore avoiding a three-game ban.

The Paisley club appealed against his dismissal and a Scottish FA disciplinary tribunal ruled in favour of the 32-year-old midfielder.

Goodwin was sent off after 28 minutes for a challenge on Kevin Thomson, with the Buddies holding on for a 2-0 win.

And "serious foul play" was downgraded to "recklessly dangerous play".

A three-match suspension would have ruled the Irishman out for the rest of the season.

Manager Danny Lennon is pleased to have his skipper available for crucial games.

"His leadership qualities last Friday night against Partick and even against Hibs in the first 30 minutes were outstanding," he said.

"And if you look at the five teams who are down there at this moment, that is the type of character and heart that you talk about [needing], but Jim Goodwin also brings along with that his great quality in terms of his football ability."