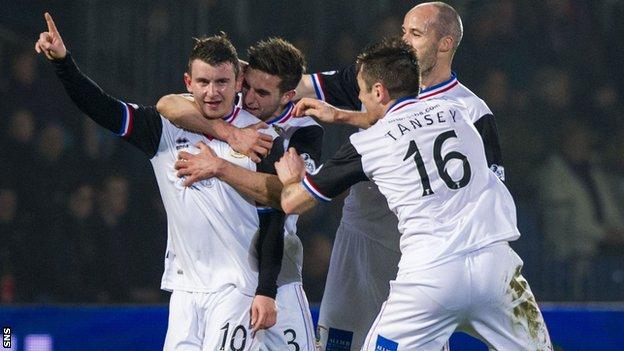 Inverness Caledonian Thistle manager John Hughes is relaxed about his summer transfer budget due to the confidence he has in his current squad.

Hughes has not ruled out new signings but is unsure whether finances will allow him to freshen up his squad.

And the manager would like to help bring local youngsters through the club's development system.

"They are still a young bunch and we have a good mix," said Hughes ahead of Saturday's visit of Dundee United.

"If we can keep everyone fit, I'm quite happy to go with that next year.

"That's not to say you wouldn't like to bring in one or two to freshen things up but if you haven't got the finance then it's not a problem."

Hughes feels his player pool has "a lot of learning to do" but is excited by the challenge.

Of the raft of new players signed by predecessor Terry Butcher last summer, only goalkeeper Dean Brill and midfielder James Vincent have made more than 20 starts.

However, Hughes feels players like defender Carl Tremarco and midfielder Danny Williams will have a bigger impact next term.

"Sometimes it takes players a long while to settle," said Hughes, who took over in December after Butcher moved to Hibernian.

"What usually happens the next year, they come back and feel they want to move up the food chain.

"They have that familiarity with the club and the supporters and how we train and play, and they come back for pre-season with a spring in their step and say 'I want to be in that starting 11'."

With three rounds of Scottish Premiership fixtures remaining, fifth-place Inverness can still finish above Motherwell and Dundee United but could also finish sixth if St Johnstone better the Highlanders' results.