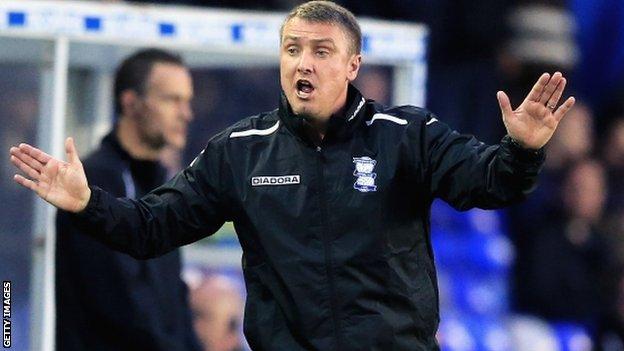 Saturday is the final day of the Football League season, with promotion and relegation issues to be decided.

Championship automatic promotion and all but one of the play-off places are secured, with Reading, Brighton and Blackburn fighting for the other spot.

Birmingham, Blackpool, Millwall and Doncaster are hoping to avoid the drop.

In League One, four teams are in a battle to avoid the drop; while the League Two title has yet to be decided, as is relegation.

A detailed guide to promotion, play-offs and relegation matters in all three leagues can be found on the BBC Football page.

Leicester secured their place in the Premier League with six games of the season remaining, before sealing the Championship title in early April. They are using the hashtag #starttheparty to promote their open-top bus parade on Monday, 5 May.

They will be joined in the Premier League by Burnley, who returned to the top flight for the first time in five years with a 2-0 win over Wigan on 21 April.

Derby, QPR and Wigan have sealed their play-off berths, so there remains one place up for grabs. Blackburn need a huge swing in goal difference to go their way, so realistically it is a straight fight between Reading on 70 points and Brighton, who have 69.

The Royals are at home to Burnley, with Brighton at Nottingham Forest.

"We've just got to go out and leave everything on the pitch and what will be will be," Seagulls defender Matthew Upson told BBC Radio Sussex.

At the other end, four sets of fans will be biting their fingernails with their teams facing the threat of relegation.

With Barnsley and Yeovil already down, Lee Clark's Birmingham currently occupy 22nd - hoping that at least one of Doncaster, Millwall and Blackpool slip up.

"We've got to keep fighting for these unbelievable fans. They never cease to amaze me," the former Newcastle midfielder told BBC WM 95.6. ahead of his side's final match, at Bolton.

"The support they have shown us, considering what has happened, is fantastic."

Wolves set a new club record haul of points to seal their return to the Championship after one season in League One. They were followed by Brentford, who were promoted back to the second tier of English football for the first time in 22 years when an Alan Judge penalty gave them a 1-0 victory over Preston on 18 April.

Preston, Leyton Orient, Rotherham and Peterborough will all be after the one remaining promotion spot available through the play-offs, so all that remains is the issue about who goes down.

Shrewsbury and Stevenage will be playing in League Two next season, but which two other teams will join them?

It looks likely that Carlisle will also drop down - they need to win at Wolves and hope Crewe, who have three more points, lose convincingly at home to Preston. The Railwaymen have a +3 goal difference advantage over the Cumbrians.

Tranmere will also be hoping either Crewe and 19th place Notts County, who are at Oldham, fail to win. A draw for Tranmere could prove enough to secure survival.

"The only thing we can do is win our game," Rovers caretaker manager John McMahon told BBC Radio Merseyside.

"It's the worst scenario that you can go into, but it's a game we go into knowing we have to win. If there's someone smiling down on us, fantastic."

The promotion places have been decided but not the title race.

Chesterfield lead the division over second-placed Rochdale by a +8 goal difference. Scunthorpe are a point behind the pair on 80.

Victory for the Spireites at home to Fleetwood should be enough, unless Rochdale run riot at Newport.

So who drops out of the League?

Torquay are down, while Wycombe, who have 47 points, occupy the other relegation spot and are three points shy of Northampton in 22nd and Bristol Rovers in 21st - they both just need to avoid defeat.

"The odds are stacked against us, but not as bad as they could be," Ainsworth told BBC Three Counties Radio.

"I still believe in fairy tales. I read them every night to my three children and hopefully I can be telling them about the day Wycombe survived."