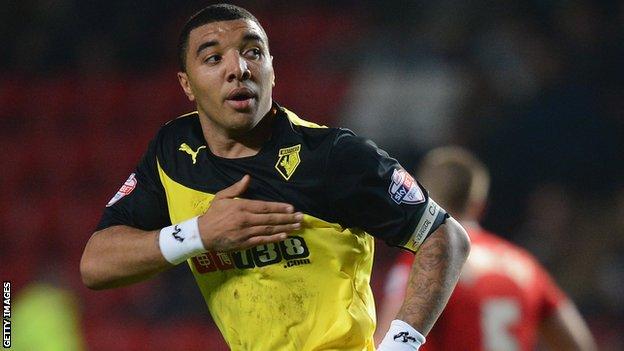 Watford striker Troy Deeney has said he has not become unsettled by reports linking him with a move to the Premier League in the summer.

Promoted Burnley, managed by former Hornets boss Sean Dyche, are the latest club to be reported as interested.

"It sounds like I'm dodging a question, but I can't affect anything," Deeney told BBC Three Counties Radio.

"There's people in the national media and on social network that seem to know more about my career than me."

He added: "If the club decides an offer is good enough they will sell, if not, they won't."

Deeney, whose side finish their Championship season at home to Huddersfield on Saturday, has been on target 24 times this season and is the first Watford player to break the 20-goal barrier in back-to-back seasons since Cliff Holton in 1961.

A signing from Walsall four years ago, the 25-year-old is also a reported target for Aston Villa.

"I'm happy. Everyone can see that I'm enjoying myself," he said.

"I've got Saturday to deal with. I can't look any further than that.

"I'm not in a position to affect what happens, so I can't worry about it."