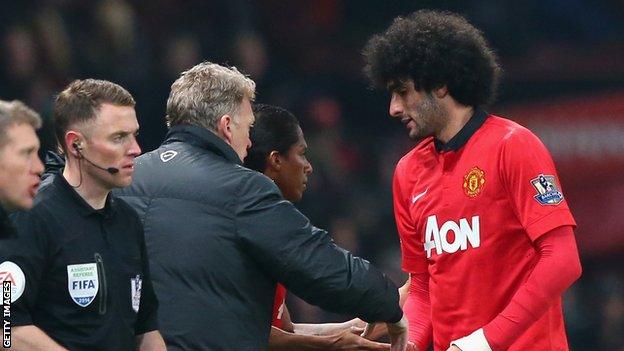 The 26-year-old, who played under Moyes at Everton, was the Scot's first signing when he took charge at United.

Fellaini told MUTV: "It was a hard week because I was close with the manager."

Ryan Giggs has succeeded Moyes on an interim basis, and ex-United goalkeeper Peter Schmeichel would like to see the Welshman get the job permanently.

Schmeichel told BBC Radio 5 live: "I would like to see Ryan and his backroom staff given the opportunity to take the club forward.

"Manchester United is culturally so different to anywhere else. It is such a difficult place to manage. You need someone who knows and understands the culture."

Giggs, who has been put in charge until the end of the season, left Fellaini out of the squad for his first game in charge, a 4-0 home defeat of Norwich City.

The Belgium international has struggled to make an impact at Old Trafford since signing from Everton in a £27.5m transfer last September.

Asked about Moyes's exit, he said: "I was sad, but that's football. Results are the most important thing in football so the club decided to make the choice.

"Now we have a new manager and we are looking forward. We have three more games left in the season and we want to finish strong."

Since the victory over Norwich, both striker Wayne Rooney and goalkeeper Anders Lindegaard have spoken out in support of Giggs getting the manager's job on a permanent basis.

Netherlands coach Louis van Gaal, 62, remains the bookmakers' favourite, though, and Giggs said the Dutchman had a "fantastic pedigree".

Should Giggs not get the job, Schmeichel believes he would be "ready" when it next becomes available.

The 50-year-old added: "I see him being a future Manchester United manager, for sure."

Nemanja Vidic will leave United to join Inter Milan in the summer, and fellow defenders Rio Ferdinand, 35, and Patrice Evra, 32, have also been linked with moves.

Giggs said: "I do believe they still have a part to play. Both their contracts are up but they have given massive service to the club."