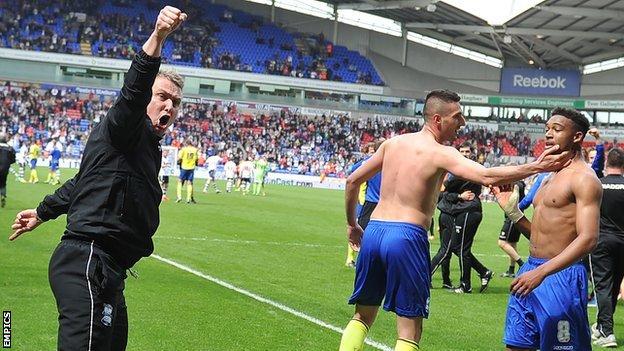 Birmingham City manager Lee Clark says keeping Blues in the Championship is the highlight of his career.

The Midlands club avoided dropping into League One as a 93rd-minute Paul Caddis goal secured a 2-2 draw at Bolton.

"It was unbelievable. I felt for my players, two down and staring down the barrel, because we were excellent all game," said Clark, 41.

"This is my biggest achievement in my career. Birmingham City is an unbelievable football club."

Clark won what is now the Championship as a player with Newcastle, Sunderland and Fulham, and also helped the Magpies finish as Premier League runners-up twice.

He was a beaten finalist in the League One play-offs while manager of Huddersfield Town.

But the drama on the final day of the Championship season left Clark revelling in Birmingham's last-gasp survival.

Blues went 2-0 down at Bolton after goals from Lee Chung-yong and Lukas Jutkiewicz before Nikola Zigic pulled one back.

Clark's side were heading for League One before Caddis's goal sent Doncaster down instead.

"We played with passion and heart," said Clark. "The players kept going. It was too important.

"I said to the players: 'Let us use this as a learning curve.' We have diced with death in sporting terms."

The former England Under-21 international said he was "delighted" for his players and praised the club's "phenomenal" fans.

"It has been a tough season for them, but thankfully we have kept them in the division and now we want to get their side where they belong," he said.

"It has been a tough last six or seven weeks for me personally and I have to thank my family too."

Goalscorer Caddis wants the players to use their near miss as motivation never to be in the same position again.

He added: "When we were 2-0 down, the first thing we heard was our fans singing and that gave us the lift.

"We have goals in us and, after we got the first one, the belief right through the team was incredible.

"I think that is the first headed goal I have ever scored."