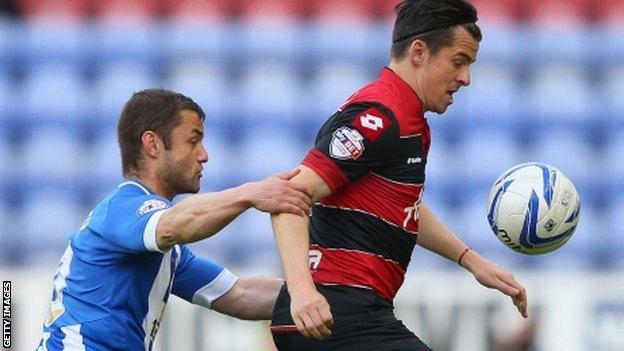 Wigan failed to break down Queens Park Rangers as their Championship play-off tie was left hanging in the balance.

However, Rangers skipper Clint Hill was lucky not to concede a penalty in the opening stages after appearing to elbow Latics defender Rob Kiernan.

May the fourth be with QPR?

Rangers are aiming to break a 16-year hoodoo by winning the Championship play-offs. The side finishing fourth in the second tier has not won promotion to the Premier League since Charlton in 1997-98.

The result leaves the semi-final perfectly poised ahead of the second leg at Loftus Road on Monday.

Both clubs were relegated from the Premier League last season and know the play-offs are their last chance to secure an instant return back to the top-flight.

While QPR have hovered around the top four throughout the season, Wigan made a late surge into the top six under German boss Uwe Rosler

But they headed into the play-offs on the back of three defeats in four matches and, despite shading possession, appeared to lack confidence in the final third.

Without top scorer Nick Powell through tonsillitis, Wigan did create an early chance when centre-back Caldwell planted a free header into the hands of QPR keeper Green from Gomez's corner.

A scrappy first half was littered with stoppages and yellow cards, but almost ended in a Wigan goal when Spanish midfielder Gomez chested down a long ball from the back before seeing his low drive blocked by Green.

Hoops boss Harry Redknapp pledged before kick-off that his team would "have a go" at their hosts, but that failed to materialise in the opening 45 minutes as his team prioritised keeping a clean sheet.

A goalless draw was perhaps to be expected after just one goal in the two previous matches between the sides this season. They drew 0-0 at the DW Stadium in October before QPR nicked a 1-0 home win in March.

A goalless draw was perhaps to be expected after just one goal in the two previous matches between the sides this season. They drew 0-0 at the DW Stadium in October before QPR earned a 1-0 home win in March.

However, Redknapp threw the shackles off his side after the break as Rangers attacked the stand housing 3,000 travelling fans with positive intent.

Latics keeper Scott Carson, who barely had a save to make in the first half, had to punch clear QPR skipper Hill's hanging cross before going down low to his left to push clear Traore's snapshot.

Wigan rallied in response around the hour mark, with Fortune ballooning over a drilled cross from team-mate Kiernan and then seeing another effort blocked by QPR defender Nedum Onuoha.

Rosler, seemingly desperate to take a lead into the return leg, made a double attacking substitution with 15 minutes remaining, introducing strikers Martyn Waghorn and Nicky Maynard.

But the Latics could not find a winner, leaving Brighton and Derby County - the sides contesting the other play-off semi-final - no wiser about the identity of their possible opponents at Wembley on 24 May.

Clint Hill to Sky Sports: "I have apologised. I caught him. It was a little bit reckless."

Wigan manager Uwe Rosler on incident: "I haven't seen it. But I was told that he had caught the player."

On the tie: "We knew it would be a tight game but the positives were that we kept a clean sheet and controlled the game. At times we could have been a little braver with filling the box with more people. Occasionally we did that and had two or three chances. Against a top team you don't get many chances and you have to take the ones you get. QPR came here to get a result but now they have got to come out at home and win the tie. The pressure is on them now."