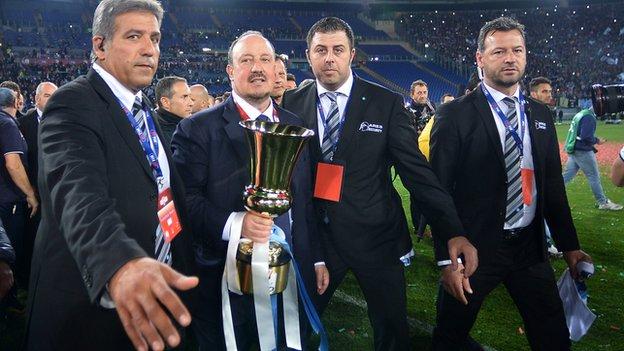 Rafael Benitez won his first trophy as Napoli manager after his side beat Fiorentina 3-1 in the Coppa Italia final in Rome.

Lorenzo Insigne put Napoli ahead early on with a superb finish and the forward doubled the lead with a deflected shot.

Fiorentina pulled a goal back through Juan Vargas and Napoli's task was made tougher when Gokhan Inler sent off for a second yellow card late on.

But Napoli sealed the win in injury time with a goal from Dries Mertens.

The game kicked off 45 minutes late following trouble inside the Stadio Olimpico after reports three Napoli fans had been shot.

But the delays did not seem to affect Benitez's players as the former Liverpool manager's side took a two-goal lead inside 17 minutes thanks to a brace from Insigne.

The Italy international scored a spectacular opener when he escaped down the left flank cut inside and curled a brilliant effort past Fiorentina goalkeeper Norberto Neto from the corner of the box.

Insigne, who has only scored two goals in Serie A this season, notched his second after he received Gonzalo Higuain's cross at the back post and saw his shot take a deflection off Nenad Tomovic which lifted the ball over Neto.

Fiorentina responded shortly before the half-hour mark when Josip Ilicic's sublime flick over the top of the Napoli defence sent Peru international Vargas clear and he volleyed home.

Vincenzo Montella's side put the Napoli defence under intense pressure in the second half and Fiorentina midfielder Matias Fernandez watched his long-range effort tipped over the crossbar by Napoli goalkeeper Pepe Reina.

Napoli were reduced to 10 men when Switzerland midfielder Inler was shown a second yellow card for a late challenge on Ilicic with 10 minutes remaining.

Ilicic fluffed an opportunity equalise shortly after when he curled wide with only Reina to beat, and Belgium winger Mertens made the result safe when he latched on to Jose Callejon's clever pass and guided the ball past Neto.