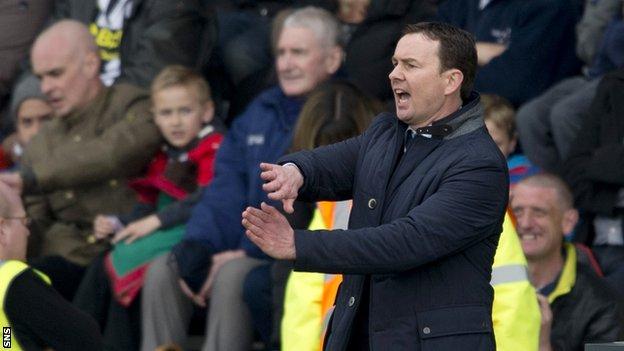 Ross County boss Derek Adams was left to rue missed opportunities in their 1-0 defeat by St Mirren in Paisley.

"It was obviously a big goal for St Mirren - it pulls them away from the pack," said Adams.

County are 10th in the table, one point better off than Kilmarnock, who visit Hearts on Sunday.

And Adams conceded that it was a "fantastic strike" to win the game at St Mirren Park.

"It's very tight at the bottom of the league and we've got two games to go. We'll see how we get on against Hibernian on Tuesday night; I thought performance-wise we played well.

"They (St Mirren) have got 4,000 fans here and a lot of support. We had a good travelling support as well.

"In the end, it was a good football match for the public to see, we're just disappointed we've lost the game, but you can't take away from the quality of goal it was."