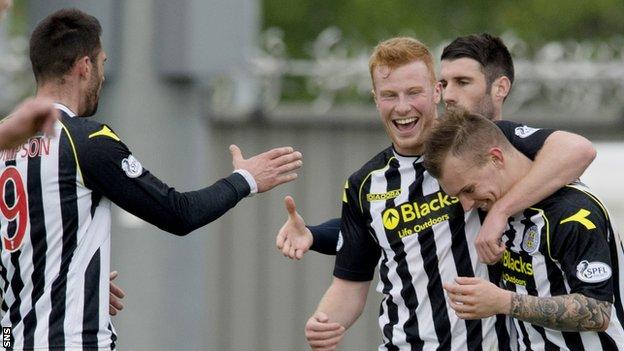 Danny Lennon praised his St Mirren's side "monumental effort" in the victory over Ross County.

Gregg Wylde's strike eased the Buddies' relegation play-off concerns with a superb strike late in the second half.

"The goal was special and we do have exciting players in that forward area - the likes of McGowan, McLean, McGinn and Wylde," said Lennon.

"He's one of the loveliest guys I've worked with in the time I've known him and he's got great qualities."

Lennon praised the spirit in the squad and running right through the club as they aim to secure their top-flight safety.

"We've had three out of the last five games here at home as well and the fans have played a fantastic part in that with the vocal support that they've given us and it's given us real positive energy," added the Buddies boss.

"[Wylde's] got fantastic pace and he's really bought into what my team's all about.

"The majority of time since he's come here, he's been on the bench, but he's always prepared to give his all when he has come on. He's made a major impact in every game he has come on and a terrific one today.

"There was a lot of creative players out there today - I mentioned our lot, but they've also got people who can carry that - Carey, Brittain - and they do pose that threat with it. I think, overall today, there was over 30 attempts at goal, so it was a really exciting game.

"I think it really shows the togetherness and how monumental the performance was today to see ourselves pull together there and once again keep a clean sheet. That shows you a real hunger and desire in what we want to achieve.

"We find ourselves in pole position at this moment in time in seventh and to remain there we've got to have a big push in the last two games of the season and look no further forward than Wednesday evening against Kilmarnock."

Asked about his future as St Mirren boss, Lennon said: "My only focus is on the remaining two games of the season and try to achieve our highest position since 1989.

"It's been a bit of a rollercoaster season for us; we've had our ups and downs throughout that, but what a prize to play for. If we manage to achieve that, it would be something to be very proud of.

"I'm not having any talks at this moment in time. Ask me again next Saturday and I might have an answer for you.

"Once again today, it was a monumental effort with the whole group of players and we're absolutely delighted and very much appreciate that we've come away with the three points."