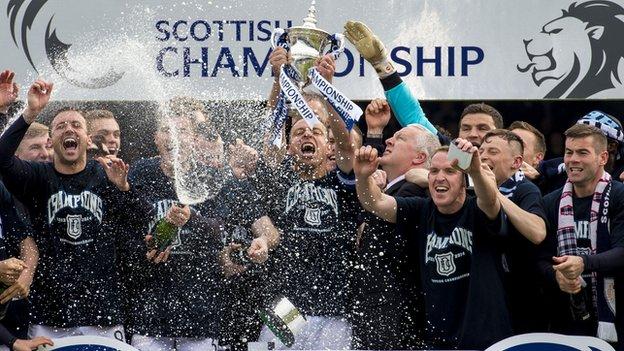 Paul Hartley thinks Dundee have done the whole of Scottish football a favour by returning to the top flight.

Hartley's side won the Scottish Championship title after a nervy 2-1 win over Dumbarton.

It means they will renew their city rivalry with Dundee United next season while Edinburgh loses its derby with Hearts being relegated.

"We are the only derby in the top flight next season, which is important for Scottish football," said Hartley.

We've got to embrace next season, but we've got to work hard in terms of how do we get better? How do we stay in the division?

Glasgow has both Celtic and Partick Thistle, unless the latter are relegated via the Premiership play-offs.

But the Scottish champions' main local rivals are traditionally Rangers, who have been playing in League One this season.

Nearly 11,000 fans were at Dens Park to watch goals by Christian Nade and Peter MacDonald secure a victory that kept Dundee two points clear at the top of the table.

"I'm delighted for the fans - they are the focal point of this club," said manager Hartley.

A Scott Agnew penalty for Dumbarton ignited the possibility of Hamilton edging out Dundee as the Accies romped to a 10-2 win over relegated Morton.

However, despite late pressure, the Sons failed to secure the equaliser that would have led to Hamilton winning the title thanks to scoring more goals during the season.

"It was nervy towards the end, but we got the job done and all credit to the players for that," Hartley told BBC Scotland.

"Great excitement, a great achievement and it's where the club belong, in the top flight."

United States company Keyes Capital invested a six-figure sum in Dundee in August and have been rewarded with promotion.

"I'm really delighted for the board in terms of the investors," said Hartley.

"They have put a lot of hard work in, a lot of resources."

It is Hartley's third promotion in a row after leading part-timers Alloa Athletic to the Championship.

The former Scotland midfielder, who replaced John Brown at Dens Park in February despite Dundee still being in the promotion hunt, stressed that Dundee must improve to remain in the top flight.

"There's a lot of hard work to be done here and we're back to work on Monday morning," he added.

"We've got a job now to try to make this club better on and off the park.

"We've got to embrace next season, but we've got to work hard in terms of how do we get better? How do we stay in the division?

"We work had as a club and as a board of directors, so I'm delighted."