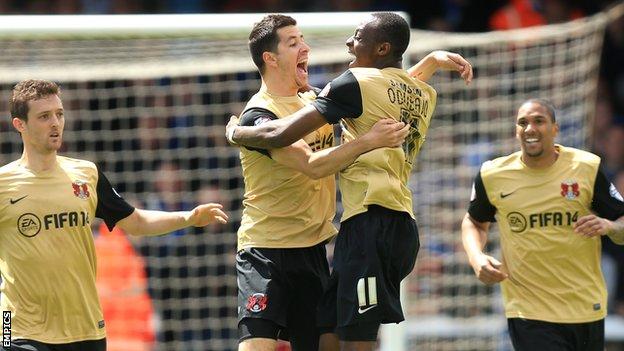 Peterborough and Leyton Orient will go into the second leg of their League One play-off semi-final all square after a scrappy draw at London Road.

Britt Assombalonga headed in Mark Little's cross-cum-shot to put Posh ahead on 16 minutes.

Dean Cox had three chances to level before half-time, including a one-on-one saved by Bobby Olejnik.

The equaliser came when Moses Odubajo rolled in the loose ball after David Mooney's effort was saved.

Leyton Orient won their maiden play-off campaign in 1989, winning promotion from the fourth tier. The O's were beaten finalists in the third-tier play-off final in 1999 and 2001.

Cox could have won it, but Olejnik kept out his near-post shot.

Russell Slade's Orient spent a large part of the season in the automatic promotion spots but, with just three wins in their last 10 games, had to settle for third place and a two-legged tie against Peterborough.

Posh have never failed in three previous play-off campaigns and are looking for an immediate return to the Championship.

The O's, who are now in their eighth consecutive season in League One, were inches away from an early lead when Kevin Lisbie's shot across goal eluded the toe of Mooney.

But Posh led, perhaps fortunately, when Jamie Jones parried Danny Swanson's shot out to Little, whose effort across goal was nodded in by Assombalonga, seemingly from an offside position, for his 33rd goal of the campaign.

Orient should have hit back, but Lisbie lost the ball under his feet during a goalmouth scramble and Cox missed a trio of chances; seeing his goalbound header blocked by Michael Bostwick after Olejnik had flapped at a long throw, failing to connect with a loose ball 10 yards out and then pulling a save from Olejnik from a tight angle.

Posh saw little of the ball in a second half low on quality but, despite Orient's possession, Assombalonga squandered a good chance on the break, firing straight at Jones, while Tommy Rowe dragged an effort wide.

The O's had been struggling to create openings but finally levelled with 18 minutes remaining when former Posh striker Shaun Batt headed down to Mooney, whose shot was parried by Olejnik into the path of Odubajo for a simple finish.

Cox pulled a superb save from Olejnik before Odubajo flashed wide, as Slade's side failed to grasp an advantage to take back to Brisbane Road for Tuesday's second leg.

"We started off really well to get into the lead. When we were composed on the ball we caused them problems but on the day they were better than us.

"In the second half I thought we didn't keep the ball enough.

"If I was in their camp I would be thinking it was a missed opportunity. We've got a great chance now.

"Coming into this game, it was the one that slightly concerned me. I think the second leg will be far better suited for us away from home."

"I wasn't happy with their goal. Clearly Assombalonga has got the last touch in an offside position. For that not to be seen is very disappointing.

"Full credit to my team. We kept grinding away in the second half, we were dominate in patches and created chances all afternoon. Thankfully we got one in the end.

"I don't think being at home in the second leg has any advantage. There's no written script in the play-offs.

"It's no good wishing we're going to get to Wembley. Wishing never won anything. It's about that work ethic."