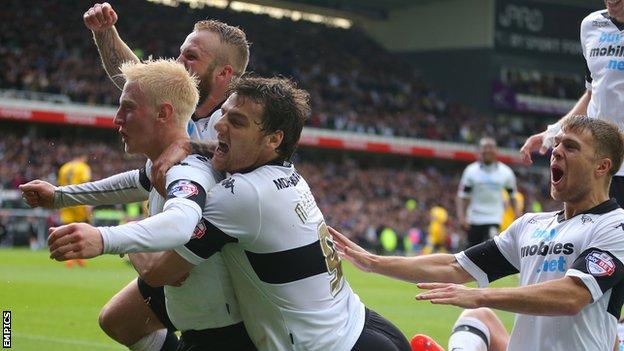 Derby County secured their place in the Championship play-off final at Wembley as they beat Brighton 4-1 to clinch a 6-2 aggregate semi-final victory.

The Rams, who led 2-1 after the first leg, extended their lead when Will Hughes flicked in Jamie Ward's cross.

Chris Martin bundled the ball over the line after Ward's knock-down and George Thorne volleyed in a spectacular third.

Jeff Hendrick made it 4-0 after Patrick Bamford's pull-back, before Kazenga Lua Lua's consolation from 18 yards.

"It has been a great day for Derby and they thoroughly deserved it.

"They looked a far better team, but credit to Brighton. They have got to the play-offs for two years running, but they were just outplayed by Derby."

Brighton, who have never played in the Premier League, have lost in the play-offs in two successive seasons.

But this was a deserved victory for Derby, who will play either Wigan Athletic or Queens Park Rangers in the final on Saturday, 24 May.

Steve McClaren's side, who finished 13 points above their opponents, benefited from a controversial 22nd-minute decision from referee Craig Pawson.

He only booked Hendrick for a lunge on Brighton's Rohan Ince when he could easily have sent the midfielder off.

And the hosts were in front 12 minutes later, when Hughes back-heeled Ward's left-wing delivery home for his first goal since 9 November.

Derby, who were last in the top flight in the 2007-08 season, nearly made it 2-0 on the night as Ward charged down Tomasz Kuszczak's attempted clearance, but the ball bounced over the bar.

Brighton's top goalscorer Leonardo Ulloa had a chance to pull a goal back when he collected Jesse Lingard's intelligent lofted pass, only to be denied by Lee Grant's excellent save.

Any hopes of a fightback ended in the 56th minute as Martin grabbed his 25th goal of the season following Ward's unselfish header across the face of goal.

Oscar Garcia's side fell further behind on 76 minutes as Thorne volleyed in a spectacular third after Brighton failed to clear Johnny Russell's shot.

It was 4-0 when Hendrick converted after fine work from Bamford, though Lua Lua did at least give Brighton fans something to cheer with a composed finish from the edge of the penalty area.

This was Derby's day, though, and they can look forward to a trip to Wembley.

They will learn the identity of their final opponents on Monday, when QPR and Wigan play their second leg at Loftus Road after a 0-0 draw at the DW Stadium.

"It is a great achievement by the players. We did not perform as we can on Thursday but they were awesome today, wearing Brighton down with their energy, enthusiasm and bringing the end product as well.

"It is a one-off game at Wembley and if we play like that we are a match for anyone."

"They were much better than us and deserved the win.

"We have had a lot of injuries and we played the most important game of the season with four or five under-21 players.

"We wanted to give everything and gamble, but it didn't pay off. They are extremely good in front of goal and we did not play very well, but we have no regrets."